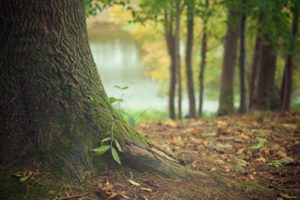 Invasive earthworms are catching scientists’ attention as the latest threat to the ability of soils in the Canadian boreal forest to sequester carbon.

The earthworms that were native to most of northern North America made their exit 10,000 years ago, during the ice age. But now, “invasive earthworm species from southern Europe—survivors of that frozen epoch, and introduced to this continent by European settlers centuries ago—are making their way through northern forests, their spread hastened by roads, timber, and petroleum activity, tire treads, boats, anglers, and even gardeners,” Canadian science journalist Alanna Mitchell reports in the New York Times.

“As the worms feed, they release into the atmosphere much of the carbon stored in the forest floor,” Mitchell writes, and “climate scientists are worried.”

Canadian Forest Service (CFS) carbon research scientist Cindy Shaw noticed the change when she was in northern Alberta a few years ago, looking at how the forest floor was recovering from oil and gas activity. “I was amazed,” she told the Times. “At the very first plot, there was a lot of evidence of earthworm activity.”

Now, while scientists are still determining how to calculate the earthworms’ impact and when it’ll hit, they’re concerned. “It is a significant change to the carbon dynamic and how we understand it works,” Shaw said. “We don’t truly understand the rate or the magnitude of that change.”

“Earthworms are yet another factor that can affect the carbon balance,” agreed CFS researcher Werner Kurz, adding that earthworm incursions in North America, northern Europe, and Russia could turn the boreal from a “carbon sponge” to a “carbon spout”, as the Times frames it.

“The relationship between carbon and earthworms is complex,” the paper explains. “Earthworms are beloved by gardeners because they break down organic material in soil, freeing up nutrients. This helps plants and trees grow faster, which locks carbon into living tissue. Some types of invasive earthworms also burrow into mineral soil and seal carbon there.”

However, “as earthworms speed decomposition, they also release carbon dioxide into the atmosphere. As they occupy more areas of the world, will they ultimately add more carbon to the atmosphere—or subtract it?”

Soil researcher Ingrid M. Lubbers of The Netherlands’ Wageningen University first framed this “earthworm dilemma” in a 2013 paper in the journal Nature Climate Change, the Times says, and science has been trying to resolve it ever since.

Saint Mary’s University environmental scientist Erin K. Cameron found that virtually all the earthworms in one study area in Alberta belonged to a species that eats leaf litter but doesn’t burrow into the soil. In a 2015 study, she modelled the worms’ effects over time. “Forest-floor carbon is reduced by between 50 and 94%, mostly in the first 40 years,” she told the Times, and that carbon is released into the atmosphere.

In an earlier study, Cameron determined the worms’ range would increase from 9% of northeastern Alberta to half of the region by 2049.

If those calculations are right, “it means the lowly earthworm stands to alter the carbon balance of the planet by adding to the load in the atmosphere,” the Times notes. The story cites research in Minnesota, Alaska, New England, Quebec, and Ontario that points toward similar concerns.

At best they’ll only be doing that for 6 months out of every 12. Unless Canada’s boreal area is to be the new Caribbean. In which case things won’t matter much – even to the worms.