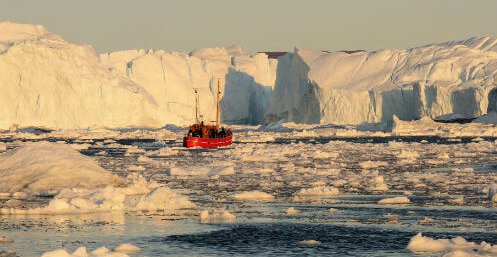 Icebergs calved from the floating tongue of Jakobshavn Isbrae

LONDON, 22 May, 2019 − If you are among the many millions of people who live near the world’s coasts, it will probably be worth your while to read this: sea level rise could be much greater than we expect.

A team of international scientists led by the University of Bristol, UK, has looked again at the estimates of how much the world’s oceans are likely to rise during this century. It concludes that the figure could be far higher than previous studies suggested.

In an extreme case, the members say, sea level rise over the next 80 years could mean that by 2100 the oceans will have risen by around six feet (two metres) − roughly twice the level thought likely till now, with “pretty unimaginable” consequences

In its fifth assessment report, published in 2013, the Intergovernmental Panel on Climate Change (IPCC) said the continued warming of the Earth, if there were no major reductions in greenhouse gas emissions, would see the seas rising by between 52cm and 98cm by 2100.

Many climate scientists have argued that this was a conservative estimate. The possibility that the eventual figure could be around double the forecast, threatening hundreds of millions of people with having to leave their homes, is sobering. It is published in the Proceedings of the National Academy of Sciences (PNAS).

The Bristol team used a different way of trying to gauge the possible effect of the way the ice is melting in Greenland, West and East Antarctica, not relying simply on projections from numerical models.

Their method used a technique called a structured expert judgement study, which involved 22 ice sheet experts in estimating plausible ranges for future sea level rise caused by the projected melting of the ice sheets in each of the three areas studied, under low and high future global temperature rise scenarios.

If emissions continue on their current path, the business-as-usual scenario, the researchers say, then the world’s seas would be very likely to rise by between 62cm and 238cm by 2100. This would be in a world that had warmed by around 5°C, one of the worst-case scenarios for global warming.

“I think that a 5% probability, crikey − I think that’s a serious risk. If we see something like that in the next 80 years we are looking at social breakdown on scales that are pretty unimaginable”

“For 2100, the ice sheet contribution is very likely in the range of 7-178cm but once you add in glaciers and ice caps outside the ice sheets and thermal expansion of the seas, you tip well over two metres,” said the lead author, Jonathan Bamber, of the University of Bristol.

He added: “Such a rise in global sea level could result in land loss of 1.79 million sq km, including critical regions of food production, and potential displacement of up to 187 million people.”

“When you start to look at these lower-likelihood but still plausible values, then the experts believe that there is a small but statistically significant probability that West Antarctica will transition to a very unstable state, and parts of East Antarctica will start contributing as well,” said Professor Bamber.

“But it’s only at these higher probabilities for 5°C that we see those types of behaviours kicking in.”

Globally important food-growing areas such as the Nile delta would be liable to vanish beneath the waves, and large parts of Bangladesh. Major global cities including London, New York, Rio de Janeiro and Shanghai would face significant threats.

“To put this into perspective, the Syrian refugee crisis resulted in about a million refugees coming into Europe,” said Professor Bamber.

Polar science is making striking advances in understanding what is happening to the Greenland and Antarctic ice sheets. New satellite measurements are showing ice mass loss happening faster than models expected, and there is also something called the marine ice-cliff instability hypothesis, which assumes that coastal ice cliffs can rapidly collapse after ice shelves disintegrate, as a result of surface and sub-shelf melting caused by global warming.

The chances of sea level rise as devastating as this are small, the Bristol team say − about 5%. But they should be taken seriously.

“If I said to you that there was a one in 20 chance that if you crossed the road you would be squashed you wouldn’t go near it,” Professor Bamber said.

“Even a 1% probability means that a one in a hundred year flood is something that could happen in your lifetime. I think that a 5% probability, crikey − I think that’s a serious risk.

“If we see something like that in the next 80 years we are looking at social breakdown on scales that are pretty unimaginable.” − Climate News Network