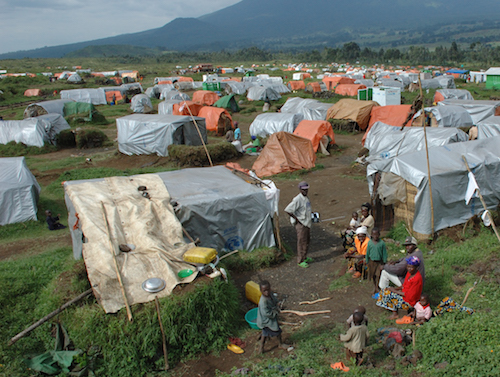 With many governments still dragging their feet on climate action, many are also actively preparing—via militarized borders and regressive immigration policies—for one of its most dire and tragic consequences: refugees fleeing climate-driven conflict, desertification, and sea level rise.

In Montreal recently on a book tour, Tucson-based journalist Todd Miller described seeing this dysfunctional and inhumane response first hand as Latin Americans, fleeing north from a region that climate scientists describe as “Ground Zero for climate change,” come up against an increasingly militarized American border.

In what Miller calls an “historic and unprecedented” increase, the number of U.S. Border Patrol agents stands at 21,000 today, up from 4,000 in 1994, National Observer reports. The fortunes of the border security market are likewise soaring globally, he added, noting the existence of 77 border walls around the world today, compared to “15 when the Berlin wall fell.”

Citing the Internal Displacement Monitoring Centre (IDMC), Observer reports that “estimates from the Intergovernmental Panel on Climate Change, the 2006 Stern Review, and other sources predict that climate change will generate from 200 million to as many as one billion migrants by 2050.” The IDMC adds that, “to date, no international convention has recognized the needs and rights of climate migrants, even though by 2010, according to a Red Cross estimate, they outnumbered the population of refugees from war and violence.”

Lacking any such legal protection—or even, Observer notes, the ability to be legally designated as refugees—those forced to flee their homes for higher ground or food to eat face increasingly hostile ports of entry. Jailing migrants in deliberately harsh conditions, or prosecuting those who try to help them, are among the strategies governments deploy to try to keep climate refugees from fleeing in the first place.

“Not only is this approach unethical and inhumane, it’s utterly ineffective,” writes Observer correspondent Toula Drimonis. “If countries don’t start to truly tackle global warming with the seriousness required, climate-induced disasters will continue to disproportionately expose the most vulnerable in this world to its dire effects, and they, in turn, will seek out alternatives.”Climate change is also provoking internal migration crises, often doubly painful as they involve secondary displacements from rural areas devastated by drought and desertification into overcrowded cities, and on into even more overcrowded slums. In Bangladesh alone, The Telegraph reports, “more than 10 million Bangladeshis will lose their livelihoods in the next decade,” many to the devastating effects of salt water incursion into fields as sea levels rise.