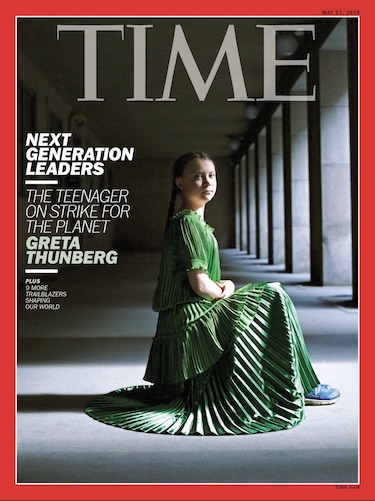 Nine months after she first sat down, alone, on the steps of the Swedish Parliament in Stockholm determined to speak climate truth to power, 16-year-old #FridaysForFuture founder Greta Thunberg has made TIME’s list of Next Generation Leaders, and will be featured on its May 27 cover.

Inspiring ever greater numbers of youth to leave their classrooms every Friday to agitate for climate action in the public square, Thunberg’s laurels are hard won, writes TIME senior reporter Suyin Haynes, who recently accompanied the young activist on a 1,200-mile train journey from London to Stockholm.

It was her determination not to be crushed by a bout of devastating depression, triggered at age 11 when she first heard about climate change and realized how little was being done to stop it, that first brought Thunberg to the steps of her country’s legislature, Haynes recounts. Determined to “channel her sadness into action,” Thunberg promised herself she would do all she could “to make a difference.”

Fast forward less than a year, and some 1.6 million students in 133 countries participated in the March 16 School Strike for Climate. And since electrifying the world with her witheringly honest rebuke of global leaders at last year’s UN climate conference in Katowice, Poland, Thunberg’s Twitter following “has grown by nearly 4,000% to reach 612,000.”

Diagnosed with Asperger’s, Thunberg is frank about how her condition enables her to speak forthrightly about the climate crisis. “It makes me see the world differently. I see through lies more easily,” she told Haynes. “For me, it’s either you are sustainable or not—you can’t be a little bit sustainable.”

Determined to keep up the pressure on policy-makers, Thunberg and her fellow strikers in Stockholm and around the world will be out of the classroom again this Friday, May 24. Then, she will pack her bags again to continue spreading the word about the urgent need for governments to come together and reduce emissions sufficiently to limit global warming to 1.5°C.

Since youth will be the ones to inherit the consequences of failure, Thunberg is crystal clear on the logic behind School Strikes for Climate: “We are children, saying why should we care about our future when no one else is doing that?” she told Haynes. “When children say something like that, I think adults feel very bad.