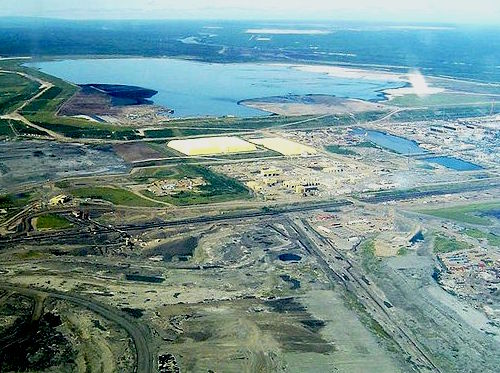 The federal and Alberta governments are planning to allow tar sands/oil sands companies to release 1.3 trillion litres of liquid waste, currently held in 220 square kilometres of tailings ponds across the northeastern part of the province, into the Athabasca River, under new regulations intended to take effect in 2022, the Globe and Mail reports.

Getting rid of the tailings, a mix of sand, salt, clay, and residual bitumen and solvents, would allow the industry and the province to clear a multi-billion-dollar liability. The new rules, under development by the two governments and industry, would “authorize discharges of treated effluent,” the Globe states, “even though the sector’s biggest companies have yet to show they can effectively clean the toxin-laced water on a commercial scale.”

Documents obtained by the Globe show the regulations would be “modelled on existing rules that authorize releases from metal, mineral, and diamond mines, provided contaminants are within regulated limits for ‘deleterious’ substances under the federal Fisheries Act,” the paper adds. “The changes would also require approval under Alberta’s Environmental Protection and Enhancement Act.” The policy work predates last month’s provincial election in Alberta, “is a sharp break from current rules that prohibit any wastewater releases, and could deepen concerns about the ecological health of one of the world’s largest freshwater deltas.”

The federal government maintains any discharges would be subject to stringent environmental controls, and the Globe says the releases are seen in some circles as a necessary step to restore the tailings ponds to their pre-development state.

“Federal and industry officials say authorized discharges could accelerate wider reclamation efforts and reduce risks of environmental damage from potential seepage and dam failures,” the Globe writes. “However, there are currently no chemical or toxicological guidelines to regulate the safe release of what is known as process water. And companies have yet to deploy technology to reduce contaminants. They include relatively high concentrations of organic compounds represented by naphthenic acids, which scientists say have potential to affect reproductive and immune systems in fish.”

Melody Lepine, director of government and industry relations for the Mikisew Cree First Nation, is participating in the policy discussions and concerned about the acute environmental pressures the Peace-Athabasca delta already faces. “They always use the river system and our drinking water as a sort of experiment, without really realizing it impacts people downstream,” she told the Globe.

An Environment and Climate Change Canada spokesperson said the forthcoming regulations “would include strict conditions that are protective of the environment,” adding that “a regulatory framework of this complexity and importance will take several years to complete and will include extensive engagement of interested parties and Indigenous peoples.”

The two governments will also spend two years designing and deploying environmental monitoring system before any tailings discharges can take place, the Globe states. “Release of treated oil sands process-affected water could only occur if human health and environmental outcomes are protected and risks are appropriately and responsibly managed,” said Scott Lundy, assistant director of external communications at Alberta Environment and Parks.

Syncrude spokesperson Will Gibson said the company had withdrawn a proposal to release up to 500,000 cubic metres of treated wastewater during a six-month period between May and October, over two consecutive years, while it worked to validate its treatment methodology. The discharge would have been the equivalent of 0.2 to 1% of the Athabasca River’s flow, the Globe reports. “We’re going to wait for the results from the closed-loop testing before we talk about the release of treated water off our site,” Gibson said.

Michael van den Heuvel, a University of Prince Edward Island specialist in the effects of agriculture and chemical use on freshwater and coastal environments, said the release of tar sands/oil sands wastewater is inevitable. “It’s going to happen sooner or later,” he told the Globe. “And it’s better it happens in a controlled and managed fashion than later on when nobody has the money.”