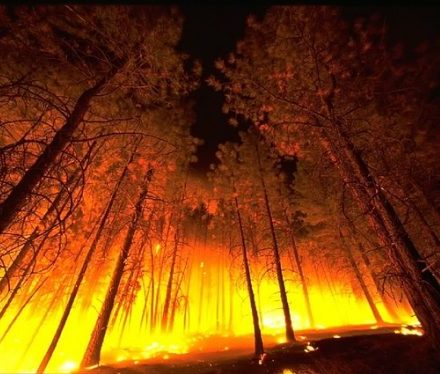 About 4,000 people in and around High Level, Alberta are under an evacuation order as the 60,000-hectare Chuckegg Creek wildfire, one of six burning out of control across the province, approaches from the southwest.

To the southeast, the Dene Tha’ First Nation issued a similar order for the community of Bushe River, CBC reports.

“By afternoon, it became a very scary sky,” longtime local resident Deb Stecyk said a couple of days before the order. “It actually looked like a thunderstorm was rolling in, but it was all smoke. It was kind of like a fire cloud.”

“It almost looked like the fire was just on the outskirts of High Level. It was kind of frightening,” she added. “Given what happened in Fort McMurray and Slave Lake…it makes everybody really nervous.”

While Stecyk said people in town couldn’t smell the smoke over the weekend, online reports from Yellowknife indicated fumes had drifted as far as the Northwest Territories.

But on “Monday at 3:12 p.m. MDT, the Chuckegg Fire was about four miles southwest of High Level,” Wildfire Today reported yesterday. “Moderate or strong winds are expected to push the head of the fire toward the northwest this week, but spread on the flanks will most likely cause it to move closer to the town at the same time. By the weekend, the forecast calls for winds out of the west that would seriously increase the threat to the town unless the 64 firefighters assigned on the 170,000-acre fire can perform heroic measures to stop the fire in that area.”

And as the fire “burns close to or into the town while pushed by a strong wind, it could be a repeat of the nightmare scenario we saw last November in Paradise, California when the Camp Fire spread from house to house,” the U.S. specialist publication warns. “In some neighbourhoods in Paradise last fall, the homes were about 18 to 20 feet apart, according to the measurements we took using Google Earth. In High Level, the separation distance is about half that — in some areas the homes are about 10 feet apart.”

With burning embers capable of travelling up to a quarter-mile, and radiant heat high enough to ignite homes on both sides of a burning structure, “you can have a self-powered conflagration spreading house to house through a city. When the structures are that close together, the homeowners have not reduced the fuel in the Home Ignition Zone, and the home itself is not built to FireWise standards, a massive disaster can be the result.”

Days ago, Alberta Wildfire information officer Derek Gagnon told CBC the fire started near Alberta Highway 35 on May 12 and is moving northwest. The road is closed south of High Level.

Still, he told Global News Monday, “we’ve been monitoring that fire very closely because of its proximity to people,” and “we do encourage residents to be vigilant about that and to make sure that they’re prepared for any situation.”

Gagnon noted Sunday that fire bans and off-road vehicle restrictions are in place across most of northern Alberta. The province has seen 409 wildfires since March 1, about 70% of them directly related to human activity.

“We have extreme wildfire conditions in northern Alberta right now, and it’s really easy for any little spark to become a big fire,” he said. “With the help of Albertans we can ensure that the forests and the people of Alberta stay safe.” Wildfire Today has details of the response to the fire, with 64 firefighters, heavy equipment, and helicopters and air tankers on the job and requests out for more support.