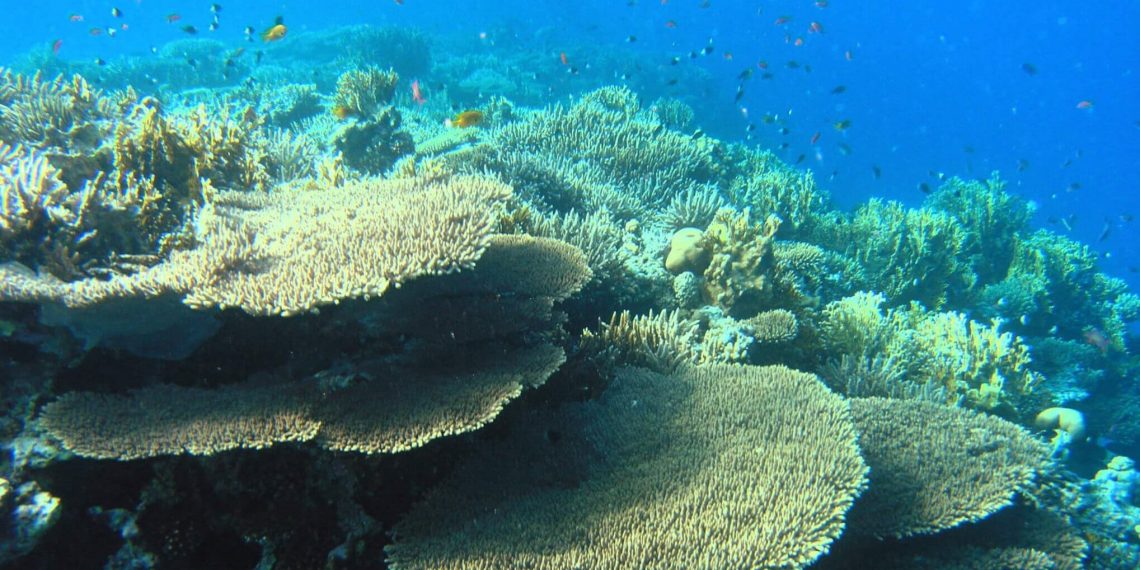 Desert dust whipped up by strong winds and volcanic aerosols alter the climate as the world warms.

LONDON, 20 May, 2019 − Located between two of the hottest and driest places on earth, the Red Sea is being protected by the desert dust that the winds whip up in the lands that surround it.

The dust so effectively blocks out the sun that the Red Sea is kept cool, saving its coral reefs from dangerous overheating and providing nutrients that keep its waters healthy.

The sea lies between North Africa and the Arabian Peninsula, the world’s largest region for generating dust, which strong summer winds pump down a narrowing mountain-fringed passage that forces it into the air over the widest southern portion of the sea.

The research, carried out by the King Abdullah University of Science and Technology (KAUST, the first mixed-gender university in Saudi Arabia), is part of a wider programme to discover the effect of dust in the atmosphere in changing the weather and climate.

Volcanic eruptions can have a significant effect by ejecting aerosol particles into the upper atmosphere where they block out some of the sun’s rays, radiating heat back into space, a process known as radiative forcing. Dust blown from deserts also has a strong regional effect.

Sergey Osipov, postdoctoral fellow and co-author with his supervisor Georgiy Stenchikov of the Red Sea study, said: “We show that summer conditions over the Red Sea produce the world’s largest aerosol radiative forcing, and yet the impact of dust on the Red Sea was never studied − it was simply unknown.”

A surprising finding relates to biological productivity. “Dust deposition adds nutrients,” he said. “However, we find that dust radiative forcing slows down the Red Sea circulation and reduces the main nutrient supply to the Red Sea through the Bab-el Mandeb strait. The net effect on overall bioproductivity remains to be established.”

Large volcanic eruptions, such as the 1991 eruption of Mount Pinatubo in the Philippines, inject vast amounts of sulphur dioxide into the upper atmosphere, where it is converted into tiny sulphate aerosol droplets.

These sulphate aerosols spread around the globe, exerting a strong radiative forcing effect, and reducing global temperature for nearly two years by 0.6°C before the dust finally settled back to earth.

The university is using its supercomputer to look at the effects of dust on the whole of the region, which is extremely arid and hurls large quantities of dust into the atmosphere, potentially changing weather patterns. It is important for future climate projections to predict droughts and famines that might cause mass migrations of the region’s peoples.

Another KAUST climate modelling study reveals potential changes in the West African monsoon caused by global warming and the dust it creates.

Home to more than 300 million people, West Africa has an agriculture-based economy: its food security is affected by the monsoon, making it important to understand present and future variability.

A KAUST doctoral student, Jerry Raj, simulated the monsoon under present and future climates. The results show that West Africa will become generally hotter as a result of climate change – with higher areas of the Sahel and Western Sahara projected to have increased temperatures of 4°C or more by the century’s end.

The simulations also indicate precipitation increases over the equatorial Atlantic and the Guinean coast, yet the southern Sahel appears drier. At the same time, Western Sahara experiences a moderate increase of rain.

Finally, and crucially for farmers sowing crops, the onset of the monsoon occurs earlier over the eastern part of the region, but is delayed over the western part.

“Strong equatorial volcanic eruptions often coincide with an El Niño warm phase, but the relationship is complex and poorly understood”

“Climate projection is the first and the most important step toward adaptation policies aimed at avoiding damaging environmental and socio-economic consequences,” Raj said.

Another doctoral student, Evgeniya Predybaylo, is looking further afield at the impact of large volcanic eruptions on a major natural climate variation, the El Niño‐Southern Oscillation.

This periodic warm water flush in the Pacific drives extreme weather events like hurricane and tornado activity as well as coral bleaching. It also causes floods and droughts and disrupts fish populations.

She says the response to volcanoes partly depends on the eruption’s seasonal timing: summer eruptions induce stronger El Niños than winter or spring eruptions.
Ocean conditions prevailing at the time of the eruption also play a role.

“Radiative forcing following large eruptions generally results in surface cooling,” explains Predybaylo. “However, the tropical Pacific often shows a warming response. We show that this is due to uneven equatorial ocean cooling and changes in trade winds.”

“A Pinatubo-size eruption may partially determine the phase, magnitude and duration of El Niño, but it is crucial to account for the eruption season and ocean conditions just before the eruption,” she says. − Climate News Network

Fish Hatched in Bitumen Slurries Can Grow Out of Deformities