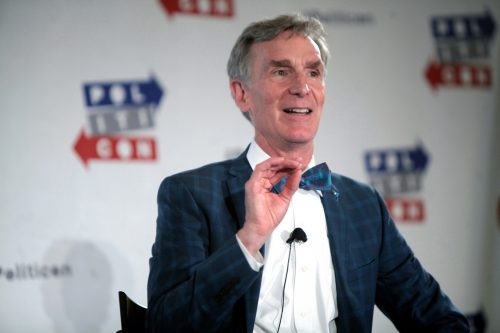 Oliver opened the show by spending nearly 20 minutes reviewing and assessing the Green New Deal recently put forward by U.S. Rep. Alexandria Ocasio-Cortez (D-NY) and Sen. Ed Markey (D-MA). “However bumpy its rollout was, to its eternal credit, the Green New Deal has succeeded in getting people talking,” he said. “But that won’t mean anything unless that talk turns to actions, and putting a price on carbon could be one of them.”

But a carbon tax “will not be enough on its own by a long shot,” he added. “We’re going to need a lot of different policies working in tandem, and we have to take action right now!”

After that, Grist reports, Nye literally took a torch to a model Earth.“What I’m saying is the planet’s on (expletive) fire,” Nye said. “There are a lot of things we could do to put it out. Are any of them free? No, of course not. Nothing’s free, you idiots. Grow the (expletive) up. You’re not children anymore. I didn’t mind explaining photosynthesis to you when you were 12. But you’re adults now, and this is an actual crisis, got it? Safety glasses off, (expletives).”