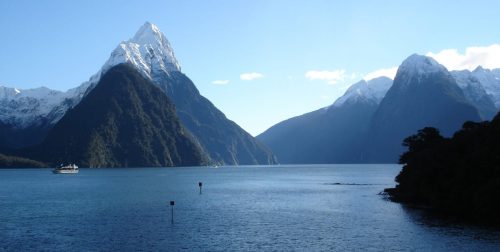 Melting glaciers worldwide – all treasured for their beauty and as sources of summer water – could be half gone by 2100.

LONDON, 13 May, 2019 – Around half of some of the world’s most beautiful mountain ranges are about to lose their melting glaciers, the force that shapes and highlights their beauty.

Swiss-based scientists investigated 46 world heritage sites nominated by UNESCO, the UN Educational, Scientific and Cultural Organisation, and compiled an inventory of 19,000 glaciers. And then, they report in the journal Earth’s Future, they calculated recent changes and the glaciers’ present condition and projected the rate of mass loss into the future.

They warn that, if the world goes on burning fossil fuels at ever-increasing rates, almost half of all these glaciers will have vanished by 2100.

In somewhere between eight and 21 such world heritage sites – national parks that have a profound role in water management and often a powerful economic role as tourist attractions – there may be no glaciers at all by the century’s end.

“Losing these iconic glaciers would be a tragedy and have major consequences for the availability of water resources, sea level rise and weather patterns,” warned Peter Shadie, who directs the world heritage programme of the International Union for the Conservation of Nature (IUCN).

“This unprecedented decline could also jeopardise the listing of the sites in question on the World Heritage list. States must reinforce their commitments to combat climate change and step up efforts to preserve these glaciers for future generations.”

And Jean-Baptiste Bosson, of the IUCN’s headquarters in Gland, Switzerland, who led the study, said: “We urgently need to see significant cuts in greenhouse gas emissions. This is the only way of avoiding long-lasting and irreversible glacier decline and the major natural, social, economic and migratory cascading consequences.”

Essentially, the study was based on a review of research so far: for more than a decade scientists have been alarmed at the increasing rates of loss in the great frozen rivers at high altitude and on the polar ice caps, in ways that will harm wealthy communities as well as poor farmers in both Asia and South America.

“Losing these iconic glaciers would be a tragedy and have major consequences for the availability of water resources, sea level rise and weather patterns”

But the researchers also looked at North America’s burden of mountain ice to forecast up to 70% of loss by 2100, and in the Pyrenees between France and Spain they warned of losses as early as 2040. Te Wahipounamu in the south-west of New Zealand could say farewell to between 25% and 80% of its ice this century.

The researchers looked at a series of projections for global warming. In some cases, the loss is inexorable. Even if the 195 nations that in Paris in 2015 vowed to keep global average temperatures “well below” a rise of 2°C by the end of the century actually take the drastic steps needed to keep that promise, at least a third of all the ice will disappear, and entirely in eight sites.

If the Paris signatories carry on with business as usual, the rate of loss could reach 60% in the 46 sites, and 21 of those would have lost all traces of ice altogether.

“The study of glacier decline further emphasises the need for individual and collective actions to achieve the mitigation and adaptation aspirations of the Paris Agreement on climate change,” Dr Bosson said. – Climate News Network