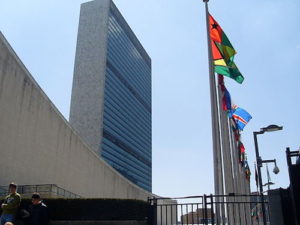 The collection of briefings, meeting minutes, notes, and correspondence “show[s] how the GCC influenced international negotiations, manipulated the Intergovernmental Panel on Climate Change’s (IPCC) process, and undertook a disinformation campaign designed to cast doubt on mainstream climate science,” the two online news outlets report. “Revealed in the documents is a decades-long campaign that continued until 2002, intended to protect its members’ interests by denying and casting doubt on climate science. Internally, the group acknowledged the dangers of climate change and the scientific consensus that it is overwhelmingly driven by the burning of fossil fuels as early as 1995.”

In 2001, the concerted effort “reached the highest levels of U.S. government,” with the State Department telling the GCC that then-president George W. Bush’s decision to reject the landmark Kyoto Protocol was “in part, based on input from you.”

The GCC originally formed as part of the U.S. National Association of Manufacturers, before setting up shop on its own in 1995, CLN and DeSmog recount. “NAM has a long history of defending portions of its membership, including tobacco companies that were facing an onslaught of liability litigation, with aggressive tactics that include discrediting science, attacking scientists, and misleading the public,” they write. The GCC’s founding members were mainly oil, gas, and coal companies and utilities.

The documents show the GCC taking particular interest in the Intergovernmental Panel on Climate Change, the UN’s climate science agency: The organization routinely lobbied IPCC scientists to accept industry language, spent tens of thousands of dollars on a “tracker fund” to monitor and lobby meetings, publicly attacked the validity of the IPCC’s peer review process, and once “boasted its suggested language was ‘accepted almost in its entirety’ after intensive lobbying by its representatives and after ‘assistance from several countries’,” the news report states.

In 1995, the GCC hosted an Exxon presentation on how to counter evidence linking climate change with human health impacts. “In 1997, the GCC wanted to expand its reach with a network of state and local committees that would educate the public about their views on climate change and serve as liaisons to other business and public interest groups with similar views. This plan was implemented, the documents show, with the help of Koch Industries, the U.S.’s largest private energy company, which is an infamous funder of climate science denial across the globe.”

The documents show the GCC stacking IPCC meetings with its members, and working hard to control news coverage of climate change.

“Press releases were sent to reporters praising media coverage featuring climate deniers and correcting those that did not,” CLN and DeSmog write. “One document encouraged reporters to contact the GCC for ‘balance in the global climate change debate’.”

By the mid-1990s, however, the GCC’s overwrought tactics were beginning to weigh on its members: CLN and DeSmog say five oil companies, two automakers, one chemical manufacturer, and one utility left the organization between 1996 and 2000.