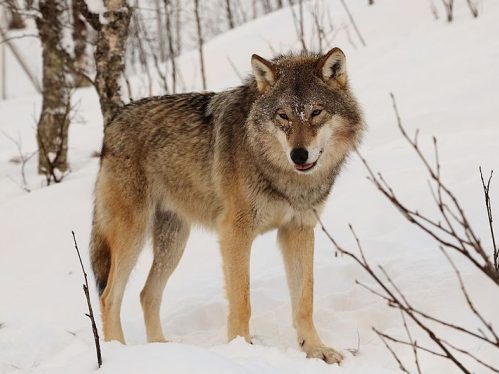 Restoration of natural habitats through “rewilding” is a key component of a rapid ecological transition, as both a “vital defence” against climate breakdown and a way to restore badly damaged biodiversity, the Rapid Transition Alliance argues in a post for Resilience.org.

“Almost a century after they were wiped out in Northern Europe and the USA, wolves, for example, are returning, causing awe and delight in some, and fear and controversy in others,” the organization states. But Rewilding Britain identifies wolves as one of 21 species whose reintroduction “can help save landscapes, and restore biodiversity. According to a 2018 report by the Royal Society, rewilding could also be used to lower greenhouse gas emissions and store carbon,” relying on wild creatures to help drive “a rapid transition of our landscape that could help mitigate some of the effects of climate change.”

The post points to TV naturalist David Attenborough, who was hesitant about rewilding as recently as 2016 but now sees it as a cornerstone of successful climate strategy, as one measure that the trend is taking off. It identifies two large-scale, private rewilding projects now under way in the UK, on a 3,500-acre estate in Sussex and a 23,000-acre site near Inverness in Scotland, as well as the reintroduction of wolves in Yellowstone Park in the United States in 1995.

And while “charismatic” species like lynx, wildcats, and wild boars are all under consideration for reintroduction in the UK, the beaver, hunted to extinction in the UK in the late 18th century, is the unassuming star of the show so far. “Its incredible engineering skills create a diverse range of habitats for birds, insects, fish, small mammals, and plants; slowing down water flow; preventing flooding downstream; and storing water for use locally.”

But rewilding remains a contentious concept in the UK. “We are wary of truly wild wildlife, but we understand the value of trees and greenery to human well-being,” the alliance states. “In 2013, the Woodland Trust estimated that if every household in England were provided with good access to quality green space, it could save an estimated £2.1 billion in health care costs.”

Rewilding also “proves how good nature is at bouncing back to abundance, given the opportunity to thrive without human interference,” the post adds. “This gives us hope for a future in which human populations could live in a more diverse environment, where the balance of nature helps mitigate our more destructive tendencies.”

And while there is some concern that rewilding could be an expensive proposition, “for a fairly small amount of money and in the right place, big changes can happen that can offer enormous benefits downstream—literally. Research by the UK’s Environment Agency suggests returning England’s water bodies to a good ecological condition could generate benefits worth £21 billion over a 37-year period.”