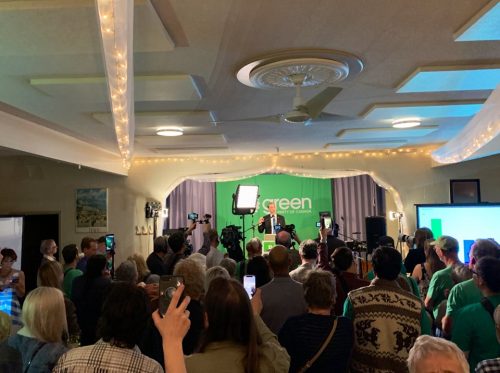 “I think as we see the rise of successful conservative politicians at the premier level right across the country who don’t believe in taking climate action, it is going to be really, really important that Canadians pick a government this fall that is committed to climate action,” he said on his way into a cabinet meeting earlier this week. “That’s certainly the point we are going to be making throughout the fall.”

It was a decidedly upbeat take on a riding campaign in which Trudeau’s party only took 11% of the vote. But it wasn’t unexpected for a prime minister who’s been gearing up to make climate one of his main planks in the general election this fall. And the conclusion, if not the Trudeau government’s performance on energy and climate, is consistent with Manly’s own victory speech Monday night.

“It sends a message clearly that we’ve seen a wave come across from Prince Edward Island…that people are serious about climate change,” he said. “It’s time to step up and do what needs to be done and have a little bit of political courage to deal with climate change properly,” he added. “Stop subsidizing the fossil fuel industry.”

But Trudeau’s plan to take advantage of the trend might turn out to be a tad optimistic.

“At first glance, Justin Trudeau’s Liberals seem well-placed to fight an election centred on climate change,” Toronto Star columnist Thomas Walkom wrote in late April. “Unlike their Conservative rivals, they’ve long had a plan for attacking global warming,” and with weather disasters in three provinces bringing climate to the top of many voters’ minds, “the Liberals—in theory at least—should be able to finesse any voter unhappiness with Trudeau’s government.”

That plan would almost certainly have been reinforced by the climate policy Conservative leader Andrew Scheer stopped just short of announcing, after epic flooding in Ontario, Quebec, and New Brunswick forced him to delay the big reveal, added Star columnist Chantal Hébert. “While the details have yet to be sketched out, it is already clear that Scheer is not about to surprise the country with more ambitious carbon emissions reduction targets than those Justin Trudeau is aiming for,” she noted.

“A Conservative government would not build on some of the foundations put in place by the Liberals over the past 3½ years. It would dismantle them, go back to square one and rewrite a new Canadian climate plan.”

But even so, “reality has a bad habit of interfering with theoretical success stories,” Walkom states, citing three factors that could derail Trudeau’s plan to put climate change at the centre of his campaign: the limited real-world impact of the 2015 Paris Agreement, the “remarkable” unpopularity of the federal carbon tax, and governments’ focus on the short-term impacts of climate change rather than its long-term causes.

“If October’s election is a referendum on who can best contribute to the global battle against climate change, Trudeau’s Liberals still have the edge on Andrew Scheer’s Conservatives,” Walkom writes. “If, however, it turns out to be a referendum on who can best help Canadians adapt to the new reality posed by climate change, that edge disappears.”