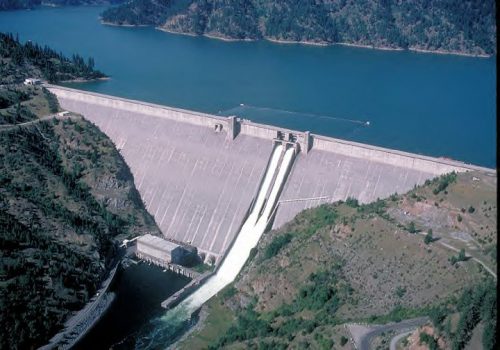 A U.S. Congress member from deep-Republican-red Idaho is acknowledging climate change and stressing the need for action, as part of an all-out effort to save his state’s critically endangered salmon population.

“Climate change is a reality,” 11-term Rep. Mike Simpson told at a conference in Boise last week. “It’s not hard to figure out. Go look at your thermometer.”

That position strays far enough from his party’s standard talking points that people are asking whether he’s “gone over to the dark side,” Simpson acknowledged. “I’ve had people say to my chief of staff, ‘we don’t even like someone of Simpson’s seniority asking these questions’.” In the days prior to his speech, Grist reports, his office “was fielding calls from nervous people asking, ‘What’s Simpson going to say at this?’”

But his motivation was easy enough to understand.

“Simpson was there to say he wanted to see Idaho’s mountain lakes full of salmon again, even if it meant tearing down the dams that the state’s politicians have defended for decades,” Grist explains. “Dams, climate change, and predators all threaten the fish, and Simpson said he was ready to consider all options. It was clear to anyone watching his speech he feels a spiritual obligation to save salmon.”

Simpson “paused to swallow hard a couple of times” before recounting his recent trip to one spawning creek in the central part of his state. Only one salmon reached the shallows, he said, to “create its bed, lay its eggs, and die. It was the end of a cycle and the beginning of a new one. These are the most,” he paused for a deep breath, “most incredible creatures I think that God’s created. It’s a cycle God has created. We shouldn’t mess with it.”

While Simpson isn’t the first U.S. Republican to embrace the reality of climate change, Grist says most of them have come from swing districts—to the extent that the bipartisan Climate Solutions Caucus “has a hard time keeping Republicans because voters keep kicking them out in favor of Democrats.” But the politics in Simpson’s Idaho district trend much farther to the right, and his position on dam removal is even more controversial.

“In the past, the people talking about removing dams have been the environmentalists outside screaming and throwing pebbles against the walls of the halls of power,” Sean O’Leary, communications director for the NW Energy Coalition, told Grist. “Now Simpson is saying the same things.”

And he apparently means it—in a way that was even more obvious in person than in the printed version of his text.

“I looked over to my right and Simpson’s wife was sitting there with tears in her eyes,” O’Leary said. “No, this was genuine.”

His appeal “might just work,” Grist adds, citing Justin Hayes, program director of the Idaho Conservation League. “He’s dealing with a regional issue, where the tangible facts can replace the hallucinations that accompany partisan rage,” writes reporter Nathanael Johnson. “While national politics might seem like it’s all about rooting your side on, Idaho is full of farmers, outfitters, fishers, and electricity buyers who are more interested in finding solutions,” and “all these people can see that the status quo is failing.”