Coastal Wetland Protection Would Save 3.3 Gigatons of Carbon by 2050 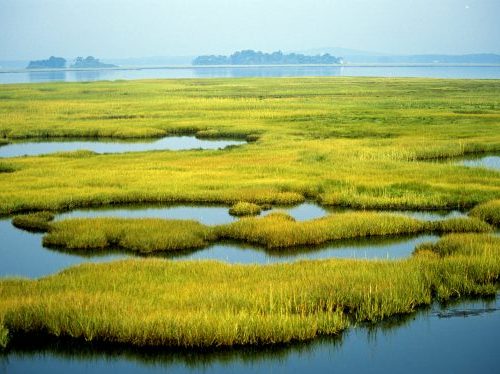 Protection of Coastal Wetlands ranks #52 on Drawdown’s list of climate solutions. The strategy could reduce atmospheric carbon dioxide by 3.3 gigatons by 2050, as long as 75 million acres of these vital ecosystems (out of a total of 121 million world-wide) can be secured within the next 30 years.

Found on every continent except Antarctica, the Earth’s mangroves, salt marshes, and seagrass beds feed fish and migratory birds as well as human communities, filter water and refill aquifers, and offer “a first line of defence against storm surges and floodwaters,” Drawdown reports. And they sequester huge amounts of carbon. Mangrove forest soils alone “may hold the equivalent of more than two years of global emissions—22 billion tons of carbon,” the authors state, “much of which would escape if these ecosystems were lost.”

But that loss is in progress: the last three decades or so have seen more than 30% of the world’s mangroves cleared to make way for oil rigs, golf courses, and shrimp farms, and otherwise degraded by pollutants that include the chemicals used to control mosquito populations.

With such clearing and degradation comes the flip of the switch from wetland as carbon sink, to wetland as carbon source. Wholesale destruction of the planet’s wetlands would break open 15 gigatons of so-called “blue carbon,” warns Drawdown, “equivalent to more than 53 gigatons of carbon dioxide if released into the atmosphere.”

That the international community has been slow to react to coastal wetland devastation owes to “wetland” too often in human history meaning “wasteland,” Drawdown states. But things are changing.

“Groups such as the Smithsonian Environmental Research Center on the Chesapeake Bay are building a body of science about the ways to maximize sequestration,” the chapter notes. And “since 2008, a group of European companies have been active in Senegal, spending millions on mangrove restoration and receiving carbon credits to offset emissions back home.”

Even so, the Senegal story has not been all good news, with the well-being of local women, especially, subordinated at least in part to the financial interest and value systems of outsiders.

“Human livelihoods and coastal ecosystems intertwine in complex ways that beg greater understanding” and the “need for equity,” writes Drawdown. But “when coastal wetland investment is done well, returns can be manifold, locally and globally.”