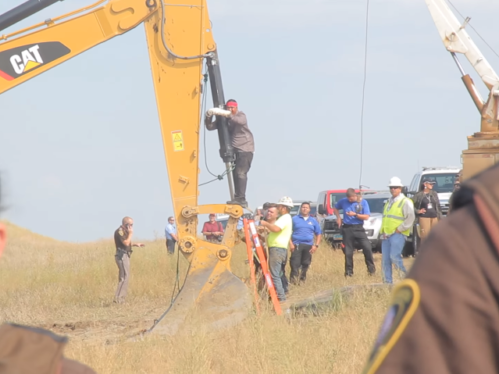 The Texas state legislature is considering a bill that could make peaceful efforts to hinder pipeline construction a crime on par with second-degree murder, an escalation of penalty which observers say violates constitutional protections on the rights to protest, and to protection from undue punishment.

As analyzed by the International Center for Not-for-Profit Law (ICNL), Senate Bill 1993 “would create harsh new criminal sanctions and expansive civil liability for protests near pipelines and other infrastructure facilities, including those under construction.” Should the bill, introduced March 8 by State Sen. Brian Birdwell (R),  become law, citizens attempting to peacefully hinder pipeline construction could find themselves facing a second-degree felony charge, punishable by up to 20 years in prison and a US$10,000 fine. Their organizations could pay up to $1 million.

The Texas Observer notes that “so-called critical infrastructure, specifically at oil and gas pipeline easements, has been the target of protests across the state in the last several years,” with activists successfully delaying construction of an East Texas portion of Keystone XL in 2012, and the Trans-Pecos line in 2016 and 2017. Now, condemning SB 1993 for “criminalizing conscientious, caring people who are the canaries for their communities,” anti-pipeline activist Lori Glover said the measure is also fundamentally redundant “because laws to protect private property are already on the books.”

Glover, who narrowly escaped an inflated felony charge for a misdemeanor action when she chained herself briefly to pipe-laying equipment in 2017, describes the bill as “a violation of the Eighth Amendment,” the U.S. constitutional amendment that prohibits excessive, cruel, or unusual punishment.

Making pipeline protests subject to second-degree felony charges puts them on par with such crimes as “assault with a deadly weapon, attempted murder, theft of $100,000 to $200,000, and indecency with a child,” added Public Citizen organizer Rita Beving. In an interview last month, Beving also expressed deep concern about the proposed legislation’s extension of “vicarious liability” to organizations, noting that litigants may pursue non-profits for “$1 million plus exemplary damages” for deeds committed by members that it did not itself sanction.

While both the House and Senate versions of the bill were proposed by Republicans, state Democrats have hardly been vociferous in their objections, The Observer states.

Describing her experience testifying at a committee hearing against SB 1993 in late March, Glover told the news outlet that “she visited several legislators’ offices to lobby against the proposals and noticed that some Democrats seemed to be on the fence”. Ultimately, Rep. Victoria Neave (D-Dallas) “broke rank” and voted for the bill in committee.

The Observer adds that the Senate and House bills, like much of the other pro-industry legislation being proposed in state capitals around the U.S., were developed by the pro-fossil, climate-denying American Legislative Exchange Council (ALEC), “a corporate-backed group that is the most prolific organization in the country at writing model legislation.” Similar state bills “have already passed in North Dakota, Louisiana, Iowa, and Oklahoma in the aftermath of the high-profile protests at Standing Rock.”

The paper says the bill could place a chill on striking workers picketing critical infrastructure, endanger Indigenous peoples seeking to protect their traditional lands, and “raise significant First Amendment implications not just for protesters, but also for journalists covering pipeline protest.” Contending that journalists “could be hit with felony charges if their presence is interpreted to interfere with operations,” the Freedom of Information Foundation of Texas has registered opposition to SB 1993.

Others opposed include the U.S. Sierra Club, Public Citizen, SEED Coalition, Extinction Rebellion, and several other Texas environmental organizations. The Observer says the bill’s backers include the Texas Oil and Gas Association, the Texas Pipeline Association, Enbridge, ExxonMobil, Chevron, Shell, and “a slew of other energy interests.”

The ‘What Were They Thinking’ Moment: How Was St-Marthe Built on a Lake Bed?