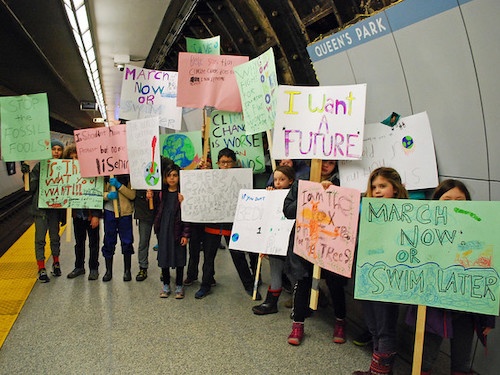 The latest in the series of #FridaysforFuture school strikes took place May 3, with youth in 725 locations expected to make what one social media videographer called “beautiful trouble” in communities around the world.

The Fridays for Future website listed strikes that covered “the Americas from Canada to Chile; Europe from Norway to Italy; Africa from Mauritania to South Africa; Asia from South Korea to India; and multiple marches in Australia and New Zealand,” Common Dreams reports. The images accompanying the story show youth on the move in Newcastle, Australia; Kampala; Fort William, Scotland; Karachi; Rome; Reykjavik; and New York City.

In Canada, an estimated 3,000 students and their supporters were out at the Ontario legislature in Toronto, and school strikes generated coverage in Vancouver, Regina, Halifax, and Yellowknife. Vancouver freelancer Tyee Bridge backgrounded the story for National Observer, with a look at the “mental health crisis” climate change is setting off among elementary and high school students.

“What I hear time and time again from students is that they feel scared and they feel paralyzed, and that they can’t do anything,” said George, a fourth-year student at the University of British Columbia and a founder of UBC’s climate hub. He added that so much of the daily news “makes them feel like the world is going to end. Their understanding is that climate change is completely happening, and that animals and people on this planet are all going to die.”

Bridge cites a recent email from a friend whose 14-year-old daughter was permitted to pick the topic of her choice for a classroom presentation. “She chose to talk about the different ways the world will likely end,” the friend told him. “She believes it will happen in her lifetime.”

One reason to listen to youth, Bridge says, is that they don’t have the “learned passivity” that enables too many adults to shift focus from the climate crisis to deal with the next deadline or mortgage payment. But he cites University of Helsinki researcher Panu Pihkala, who says “eco-anxiety” is affecting people of all ages.

“At one extreme are the serious symptoms, such as shock and fear, which often have psychophysical manifestations, including sleep disorders and physical discomfort,” Pihkala said in a 2018 article. “At the other extreme there are less severe symptoms, such as melancholia and restlessness.” But he cites children and adolescents as “a key group” whose “mental processing capacity is still developing, making their potential for personal actions in the world of adults limited.”

George said a bad picture is made worse by the “profound dissonance” youth see between the urgency of the climate crisis and the muted response from parents, teachers, and politicians. “So this is a mental health crisis,” he told Bridge. “Climate change is weighing on young people, and we deserve to give them hope on climate change, the hope that they can have a future. I hear over and over from students that they are looking for that, they are craving that agency and that hope.”

Bridge traces how news of #FridaysforFuture founder Greta Thunberg’s solo strike in front of the Swedish parliament produced exactly that kind of hope for Vancouver school strike leader Rebecca Hamilton. She’d previously found the focus of high school sustainability groups far too limiting when “this problem is so much bigger than, you know, recycling our bottles and cans,” she said. “It’s important, but that’s not going to solve the problem.”

But “when I heard about Greta sitting outside of parliament and striking from school, it really resonated with me. She was dealing with a crisis with the urgency and scale that it so needed. She was literally saying, ‘I can’t go along with my normal day-to-day life in the face of this crisis. I’m going to stop that, and put everything on hold to prioritize climate action.’ Which is what the entire world needs to be doing.”

She told Bridge she has friends and peers who feel like they’re the crazy ones when they see the massive disconnect between the science of climate change and the way societies are responding.

“What I tell young people is that, first of all, you’re not delusional for recognizing that the world is delusional. It’s the world that’s crazy, it’s not you,” she said. The way out of that paralysis, she added, is to “get together with other people who also recognize that the world is delusional. Taking action is really the most powerful thing you can do, and the climate strike movement is hitting the problem from the root.”