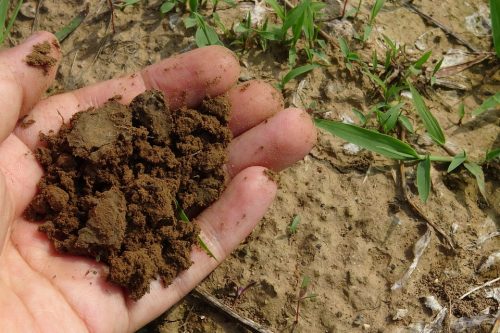 The urgent need to restore the health of the world’s agricultural soils—for the sake of the food supply, and as a critical tool in climate mitigation—is one of the major themes of the global biodiversity report due for release today by the Intergovernmental Science-Policy Platform on Biodiversity and Ecosystem Services (IPBES).

Damaged by erosion, compaction, urban development, and over-irrigation, unhealthy soil drives climate change in two ways, the BBC reports: it compromises plant growth, which means less carbon absorbed from the atmosphere, and its own natural capacity to sequester carbon falters.

IPBES Chair Robert Watson, who previously chaired the Intergovernmental Panel on Climate Change (IPCC), said more than three billion people already suffer the impacts of degraded soil, and the situation will only worsen as the feedback loop of poor soil, lost carbon and crops, increased C02, and the soil-degrading force of climate change-driven flooding and drought takes hold.

“Governments have focused on climate change far more than they have focused on loss of biodiversity or land degradation,” Watson said. “All three are equally important to human well-being.”

UK soil expert Prof. Jane Rickson noted that “only 3% of the planet’s surface is suitable for arable production, and 75 billion tonnes of fertile soil is lost to land degradation every year.” Those soils “form at a rate of one centimetre in 300 years,” she added.

While there is still “uncertainty about the exact level of global soil degradation,” the BBC notes, South America, sub-Saharan Africa, India, and China are clearly in trouble. “Soil scientists in both the biggest Asian nations are worried that their ability to grow their own food may be compromised.”

While rewilding and allowing forests to regrow may be an option in some cases, an increasing number of farmers around the world (supported by cutting-edge research and enlightened policy) believe that simply farming in ways that support soil health can both ensure the food supply and help mitigate climate change.

When it comes to carbon farming, California is breaking new ground. Launched by then-governor Jerry Brown in 2017 as part of his pledge to make the state carbon neutral by 2045, California’s Healthy Soil Initiative essentially pays farmers to actively sequester carbon in the farm soil, reports National Public Radio.

Though often driven more by the immediate impact of extreme weather events than an explicit focus on climate change, farmers in the hundreds have signed up for the soil health program. Responding to urgings by state climate officials who say the program “needs to be five times larger to have real impact,” current Governor Gavin Newsom “has requested more money for the program, but a decision will be up to state lawmakers as they craft a budget in coming weeks,” NPR states.

High Country News adds that the number of program participants “is likely to increase, since the 2018 [U.S. federal] farm bill includes provisions for a pilot program that gives farmers an incentive to farm carbon.” And because the healthy soil that accrues with carbon farming means fewer costly chemical inputs, the innovative return to age-old methods like using cover crops, no- or low-till, and top-dressing with compost is just as good for business as it is for the climate.

But “logistic and economic challenges remain,” High Country cautions, beginning with the up-front costs of the changeover. Because compost actually costs a great deal to produce, its application in California’s fields “costs around $700 per acre—more than the majority of ranchers and farmers can afford.” While the state is trying to address that problem with small grants, the demand for compost currently exceeds supply.

Another important unknown is just how long soil can sequester carbon. And then there is the likelihood that “climate change itself could be an enemy of carbon farming: as temperatures warm, soils heats up, and soil micro-organisms expel carbon dioxide.” Alert to this biological reality, the Intergovernmental Panel on Climate Change has calculated that “by 2100, up to 15% of the world’s soil and biomass could become net carbon emitters,” High Country News notes.