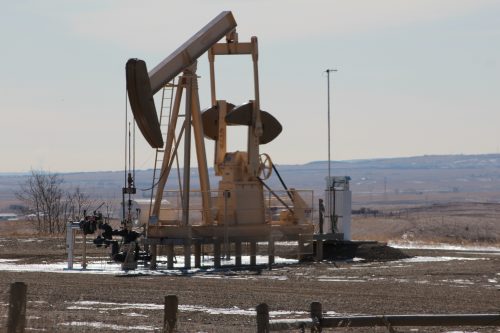 A bankrupt Canadian fossil is walking away from 4,700 abandoned natural gas wells and an estimated C$329 million in clean-up costs, according to a report last week by the industry-funded Alberta Energy Regulator (AER).

“Junior gas company Trident Exploration Corp. shut down abruptly Tuesday without responding to an order to properly manage its 4,700 wells—adding to the more than 3,000 orphan wells already awaiting remediation in the province,” CBC reports.

“Trident does not have the funds to operate its infrastructure or enter into creditor protection,” the AER said in a release. “As a result, they have decided to walk away, leaving more than 4,400 licenced sites, many of them active, without an operator.”

The AER said it had been “working with Trident for weeks to ensure the company’s assets end up with ‘responsible operators’ and that end-of-life obligations for wells are addressed,” CBC notes. “On Monday, Trident told the regulator it would be closing, so the AER ordered the company to decommission sites, post financial security, or transfer the sites to other energy companies. But on Tuesday, the AER said Trident’s directors ceased operations, terminated employees, and then resigned—without responding to the order or addressing any regulatory obligations.”

Coverage in industry newsletter JWN Energy headlined a “treacherous environment” for investors as the leading cause of the company’s failure. “Trident said that its liquidity has been exhausted by the combination of extremely low natural gas prices and high surface lease and property tax payments (totaling C$0.72/GJ),” JWN writes. “Trident also blamed the recent Redwater decision by the Supreme Court in favour of the AER, which ruled that capping of orphan oil and gas wells and land reclamation should take precedence over creditors when a company goes bankrupt and leaves behind orphan wells.”

“These challenges reached a tipping point with persistent, unaddressed capacity constraints on TransCanada’s NGTL system,” the company said in its statement. “Further, and despite our extensive efforts, Alberta has no mechanism to allow a struggling energy company such as Trident to address its inflated surface lease and property tax obligations.”

AER spokesperson Cara Tobin told CBC the regulator can usually make satisfactory arrangements with fossils that are going out of business, but this may not be one of those times. “We are still working on our options,” she said. “Generally speaking, yes, a situation like this is concerning.”

She added that, “while we are aware of the difficult market conditions Trident has endured, we also have a responsibility to ensure that safety and environmental requirements are being met.”

On Friday, CBC said more than a dozen other Alberta fossils may be headed down the same road as Trident. A day earlier, the Canadian Association of Petroleum Producers (CAPP) said the bankruptcy could reflect changing investor attitudes in light of the Redwater decision.CAPP Vice President Brad Herald “says institutions are now taking a harder look at costs of cleaning up old wells after the so-called Redwater decision,” The Canadian Press reports. “But University of Calgary resource law professor Nigel Bankes says it’s good that bankers are weighing clean-up costs in their financing decisions.”