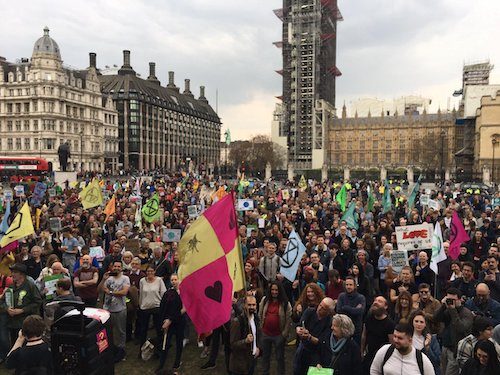 The British House of Commons has endorsed a motion by Labour leader Jeremy Corbyn declaring a formal climate and environmental emergency, after Conservative Members of Parliament were instructed not to oppose the measure.

The May 1 opposition day motion came just days after Extinction Rebellion (XR) concluded nine days of high-profile protests in the streets of London, a Greenpeace UK poll showed two-thirds of the British public demanding government action on the climate emergency, and the devolved parliaments of Scotland and Wales adopted their own climate emergency resolutions.

Corbyn told Parliament the decision to pass the motion without a vote “can set off a wave of action from parliaments and governments around the globe,” The Guardian reports.

“Protesters and school strikers told us to act,” he added. “Governments never act without pressure, and we must keep the pressure up.”

Corbyn said the activists behind a global wave of school strikes and the XR protests “grasp the threat to their own future.” He asking MPs: “Are we content to hand down a broken planet to our children? That is the question members must ask themselves today. We have the chance to act before it’s too late. It’s a chance that won’t be available to succeeding generations. It is our historic duty to take it.”

Environment Secretary Michael Gove “said he accepted ‘that the situation we face is an emergency’, and called for a consensual, cross-party approach so the UK could take a lead on climate action,” The Guardian notes. On Tuesday, however, Extinction Rebellion members said a meeting with Gove was “very disappointing” after he declined to declare a climate emergency.

XR presented three demands in the meeting, the BBC reports: that the UK government “tell the truth” about the scale of the climate and environment emergency, enact binding policies to bring emissions to net zero by 2025, and form a Citizens’ Assembly to oversee the transition. Gove “said the group’s first demand was ‘on the money’ and agreed there needed to be a deeper level of public understanding over climate change,” BBC recounts. “He also said he was ‘open-minded’ about the possibility of citizens’ assemblies.”

But while he described the state of carbon emissions as “grave”, he disagreed on the time frame for reducing them, on whether an emergency declaration was needed.

“There is an open question to what the date should be, and I am open to a higher level of ambition for this government than we have seen in the past,” he said. “We have got to take action, and what I would like this government to be judged by is, not what it proclaims, but what it achieves, and there is much more that we need to do.”

“It is important to stress how out of step the current political class is with ordinary people,” XR strategy team member Sam Knights responded, declaring Gove’s refusal to declare a climate emergency “not only a political failure, but a moral failure”.

Replying to Corbyn’s motion in the Commons a day later, Gove said: “Not only do I welcome the opportunity that this debate provides, I also want to make it clear that on this side of the house we recognize that the situation we face is an emergency. It is a crisis, it is a threat, that all of us have to unite to meet.”

But when Gove laid claim to “a green thread of ambition running through Conservative governments”, Green MP Caroline Lucas interrupted to ask how that claim aligned with the May government’s support for a third runway at London’s Heathrow Airport. Gove didn’t answer the question. Writing in The Independent, Lucas said she agreed with Labour declaring a climate emergency, but questioned how Corbyn’s motion matched up with his party’s support for a new coal mine in Cumbria.

Earlier in the week, a cross-party committee that included Lucas and former Labour leader Ed Miliband called on Prime Minister Theresa May to end “climate appeasement” and place the UK “on a war footing”, deploying as much effort against the climate crisis as it took to defeat Nazism, The Independent reports.

Activists uniformly welcomed the House of Commons resolution, but most stressed that it must now be followed up with action, Common Dreams reports.

“This is extraordinary. A people’s emergency was declared from below and the politicians were forced to follow. Huge congrats to everyone who was part of this,” tweeted organizer and author Naomi Klein.

“The UK Parliament has declared an ‘environment and #ClimateEmergency’. Now we must act on it. It means: No 3rd Runway at Heathrow, no fracking, leave fossils in the ground, retiring fossil fuel-based infrastructure, encouraging a shift to a plant-based diet, an end to economic growth,” added author George Monbiot. “Historic and very hopeful news. Now other nations must follow. And words must turn into immediate action,” tweeted #FridaysforFuture founder Greta Thunberg.