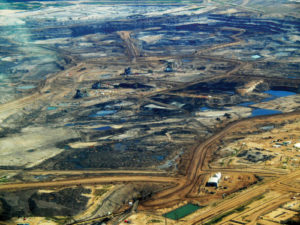 Shareholders at Cenovus Energy’s annual meeting in Calgary last week roundly defeated a shareholder resolution that would have required the Alberta tar sands/oil sands producer to align its greenhouse gas emission targets with the Paris Agreement.

The motion was put forward by the Fonds de Solidarité des Travailleurs du Québec (FTQ), an investment fund set up decades ago by Quebec trade unions, and its defeat—with 89% opposed—was not a surprise.

“At the end of the day, it’s not about the final vote—what really matters is that climate change is not going anywhere,” said Laura Gosset, senior analyst at the Vancouver-based Shareholder Association for Research and Education (SHARE). “It’s an issue for companies like Cenovus. And, as shareholders, we are going to continue to try and raise this issue, because it’s something that we are concerned about, and we want to understand the company’s plan for resilience in a low-carbon future.”

Had it been adopted, the motion “could have forced Cenovus to set medium- and long-term targets for its direct and indirect methane and other GHG emissions from operations,” CBC reports, a plan that CEO Alex Pourbaix said would have been too “prescriptive” for his liking.

“FTQ’s proposal said the oilsands company’s disclosure of GHG emissions reduction targets had been ‘inconsistent,’ resulting in uncertainty for investors about how climate-related risks are being managed,” CBC adds. “It said Cenovus shareholders require ‘clear, consistent, and comprehensive’ disclosure of its plans to transition to a low-carbon future.”

While the Cenovus board recommended against accepting the motion, that “was not because we do not place a high priority on environmental performance in reducing our GHG emissions intensity,” Pourbaix said. “Our recommendation was because we had challenges with the prescriptive nature of the proposal, despite its alignment with our values on the importance of planning for and demonstrating environmental performance.”