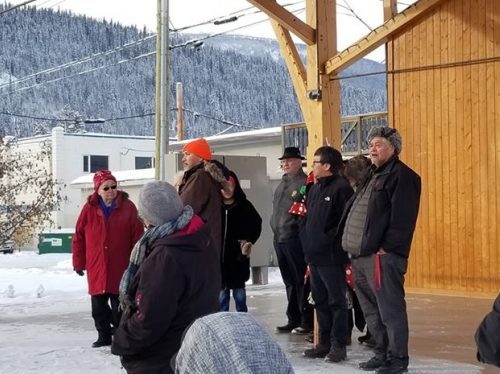 Operating “under the umbrella of the UN Human Rights Commission” with a mandate that “includes addressing specific cases of alleged violations,” CBC reports, the rapporteur heard hereditary Wet’suwet’en chief Na’Moks (John Ridsdale) express his nation’s deep concern about the extent to which the rights of Indigenous peoples in Canada are subordinated to corporate interests.

Referring directly to the community’s ongoing struggle to keep pipeline contractors out of their territory, Na’Moks “asked the UN to emphasize to Canada the need to fully implement the UN Declaration on the Rights of Indigenous Peoples, and that states need to recognize the human right of people to peacefully express dissent to activity in their territories without being criminalized,” the national broadcaster states.

Having “long maintained [that] it does not consent to pipelines being built through the traditional territory,” the Wet’suwet’en are fighting hard to prevent contractors for the TransCanada-owned Coastal GasLink pipeline from crossing through the Unist’ot’en protest blockade.

The Wet’suwet’en said they had deliberately re-established a permanent presence in the longtime seasonal hunting camp. “We have reoccupied our lands to prevent industry from invading and polluting them from pipeline projects,” said longtime Unist’ot’en camp spokesperson and resident Freda Huson. “We have practiced free, prior and informed consent to determine who is given access to our territory.”

Not having been granted such access, Coastal GasLink sought and received a December 2018 court injunction which the RCMP enforced in January, arresting 14 people who were blocking entry into the Unist’ot’en camp. Civil contempt charges against the 14 were dropped April 15, but “the injunction remains in effect,” CBC writes.

That Canadian law should hold sway over Wet’suwet’en territory is an affront to the nation’s status, possessed of its own laws which must be respected, Na’Moks told his New York audience. “We are a government,” he said. “We decide who comes on our territory. We are the hereditary chiefs. British Columbia and Canada only have presumed authority on our lands.”

While the federal department of Crown-Indigenous relations did not respond to CBC’s request for comment, B.C.’s Indigenous relations ministry told CBC it is committed to “advancing meaningful reconciliation” with the Wet’suwet’en, CBC reports, “with the goal of B.C. affirming Wet’suwet’en rights and title, guided by the UN Declaration on the Rights of Indigenous Peoples and Canadian jurisprudence such as the Supreme Court of Canada’s Delgamuukw Gisday’ Wa decision.” The province added that “this dialogue between B.C. and the Wet’suwet’en hereditary leadership has only just begun”, and is a process unconnected “to any specific project.”

“Indigenous women are worried that when construction starts on the Trans Mountain pipeline, women will suffer,” said Sacred Earth Solar founder Melina Laboucan-Massimo. “Almost every Indigenous woman in these rural, isolated communities knows someone who has experienced sexualized violence—when industrial worker camps are built near our communities, it only exacerbates the issue, and the federal government needs to do something about it.”