Ottawa, Toronto, Burlington, and Victoria Step Up with New Action on Climate 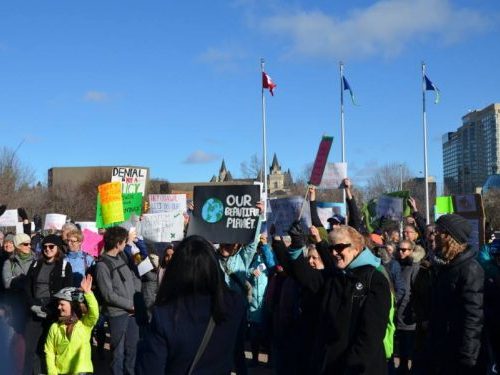 The eight-point emergency resolution in Ottawa, put forward by Councillor Shawn Menard, includes concrete steps for the city to deliver results on carbon emission reductions and climate impacts, as well as a statement of intent.

During the council debate Wednesday, Mayor Jim Watson “scoffed at suggestions that municipalities can do little to fight rapid climate change,” the Ottawa Citizen reports. “If everyone took that attitude in all three levels of government, we’d be in a very terrible state when it comes to the air quality and the livability of our city,” he said.

Ottawa city hall reporter and self-styled “stormwater correspondent” Jon Willing says councillors (most of them, anyway) could hardly have voted against the resolution at a time when its “riverside communities and neighbouring municipalities are fighting bloated waterways” in the midst of severe regional flooding.

“That was the easy part,” he writes. “Now, with city hall in an ‘emergency’ environmental mode, and a council about to decide on its term priorities, it will be pressured to make sure staff and politicians are keeping climate change at the core of each decision across the corporate portfolio.”

As The Mix reported two weeks ago, the details in the resolution commit councillors to a fairly robust plan of action, including aligning the city’s current climate target with a 1.5°C pathway, setting 2030 carbon reduction targets for city operations and the community as a whole, completing a community vulnerability assessment and resilience plan, and recognizing climate change as a strategic priority for the current term of council, which ends in 2022.

At the time, with the resolution up for debate before the city Environment Committee, committee chair Scott Moffatt contrasted the detail in Menard’s motion with less action-oriented versions adopted by some other Canadian cities. “If it was symbolic, it would not be here,” he said. “I wouldn’t let it get to this point.”

Now, Willing says, the city will be on the lookout for steps it can take to cut carbon pollution without increasing costs for taxpayers. “The most winnable environmental decisions at council will likely be in the Energy Evolution program if the city can propose ways to lower energy consumption costs and reduce greenhouse gas emissions,” he writes. “But council will be challenged when an initiative comes with both big price tags and big environmental gains.”

In Burlington last Tuesday night, city councillors unanimously declared a climate emergency, with a resolution aimed at “recognizing the magnitude of the challenge we face in combatting climate change,” said its sponsor, Councillor Rory Nisan. But the resolution “is only one step,” he added. “Through the declaration, we have requested a comprehensive climate action plan by the end of the year, and that plan is where we will begin to make real, practical change for Burlington.”

In Toronto, Councillor Mike Layton took a different tack, with a motion to explore legal action against colossal fossils to recover their fair share of the city’s climate-related costs. An amended version of the measure passed unanimously Thursday at the city’s infrastructure and environment committee, the Toronto Star reports.

“We know there are going to be more costs coming, and who is going to pay?’ Layton said. “It’s going to be all of us.” So “we’ve got to make sure that those who are profiting, and have historically profited off it, pay their fair share.”

During the committee hearing, Councillor Jennifer McKelvie, an environmental geoscientist, received Layton’s support for an amendment instructing city staff to report on “partnership models between oil and gas companies and other cities internationally…that are being used to combat climate change.” She told the committee: “There are lots of smart scientists who work in these oil and gas companies, and we need to use that knowledge so we can move on to renewables and we can move on to biofuels.”

Layton, who also holds a master’s in environmental studies, “said he believes fossil fuel producers carry a lot of blame for climate change and, if they won’t volunteer to pay mitigation and remediation costs, must be forced,” the Toronto Star notes.

The Star says 13 members of the public came forward during the committee hearing to support Layton’s motion.

“At the moment we do not know the whole detailed impact climate change has had on Toronto,” said 18-year-old Aviva Gale-Buncel. “It is important to hold fossil fuel companies and major polluters accountable for putting profit and money over the lives of future generations.”

Fossil defenders “try to make it about the oil workers’ jobs against all of us lefties in Toronto,” said Climate Fast organizer Rosemary Boissonneau. “But this (motion) puts the blame where it belongs, the people that need to pay front and centre, the people who are making obscene amounts of money while ruining our future.”

Toronto Mayor John Tory recognizes the reality of climate change, supports local action through the sparsely-funded TransformTO initiative, and understands the need to track the possible costs to the city, but “is not in favour of the City of Toronto becoming involved in lawsuits against oil companies,” said spokesperson Don Peat. “He does not think those kinds of lawsuits advance the protection of the environment.”

In Victoria, councillors were nearly unanimous in adopting a plan to address the climate crisis through a major increase in transit ridership, with eight votes in favour and only one against. The measure calls for “a major expansion of public transit ridership in the Capital Region, focused on the phasing out of user fees and a substantial improvement in service levels and fleet electrification,” CHEK Media reports. “The resolution also states council should develop a plan for free transit within the Capital Region as a form of climate action.”

“A climate emergency has been declared by local governments in the Victoria Regional Transit System service area,” stated the motion by Councillors Ben Isitt and Sharmarke Dubow. “This means that changes in transportation choices in the region have the potential to make the biggest impact toward carbon neutrality and meaningful climate action in line with the climate emergency and IPCC targets.”

Things will get under way in the city’s 2020 budget, with measures to eliminate user fees for everyone aged 18 years and younger and replace lost revenue by adjusting provincial revenues and property taxes.