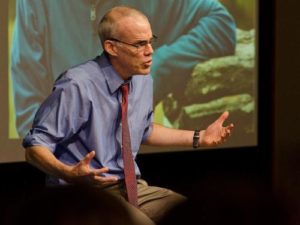 Today’s climate crisis is akin to the challenges an earlier generation faced in the Second World War, and it’s “an honour and a privilege to be part of the battle,” 350.org co-founder Bill McKibben told an audience in Vancouver earlier this month.

“Not very many people in any given moment of history get to say they are doing the most important thing they could be doing right now in the world,” McKibben said, in an appearance alongside federal Green Party leader Elizabeth May. “It’s time for us to disrupt, if only for a day, business as usual,” he added, citing #SchoolStrike leader Greta Thunberg’s ability to speak truth to power. “It is business as usual that is just doing us in. We’ve got to…put pressure on people who need pressure on them.”

McKibben traced the “ferocious, ferocious speed” with which climate impacts are changing the world, recalling that the town of Paradise, California “turned to hell” when a wildfire burned it to the ground last fall. “It’s as if Mother Nature is just trying everything she can think of, including irony, to get our attention,” he said.

But McKibben stressed that he still sees a path to getting climate change under control, National Observer reports.

“The cheapest way to produce energy around the world is to do it renewable,” he said. “If we wanted to solve the biggest problem that humans have faced, we are capable of doing it. It would not be simple and it would not be free,” but “it is well within the realm of the possible.”May agreed that last fall’s landmark IPCC report on 1.5°C pathways pointed to political will—or, as she prefers to call it, “political courage”—as the last missing element humanity needs to confront the crisis. “They said it’s not too late,” she said. “They said we have time to save ourselves.”