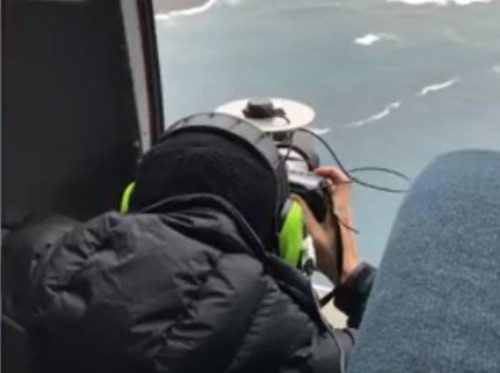 Carbon pollution from four major tar sands/oil sands mines in northern Alberta is 64% higher than their owners reported using the United Nations’ standard emissions measurement framework, according to a study released this morning in the journal Nature Communications.

“The researchers, mainly from Environment Canada, calculated emissions rates for four major oilsands surface mining operations using air samples collected in 2013 on 17 airplane flights over the area,” CBC reports. The study found gaps from 13 to 123% between reported and actual emissions at the four facilities, a finding that “could have profound consequences for government climate change strategies”.

As for the fossils that submitted the data, “they’re just doing exactly what they’ve been told to do,” said John Liggio, an aerosol chemist at Environment and Climate Change Canada. “They’re not doing anything on purpose.”

“The bottom line is we still have more work to do in terms of really determining how much is being emitted,” Liggio told CBC.

The findings of this one study place Canada’s total greenhouse gas emissions about 2.3 higher than they were previously believed to be, CBC notes. “If research eventually shows that other oilsands sites are subject to similar underreporting issues, Canada’s overall greenhouse gas emissions could be as much as 6% more than thought—throwing a wrench into the calculations that underpin government emissions strategies.”

On CBC, Liggio explained the standard, “bottom-up” method by which fossils are required to report their production emissions is fraught with uncertainty, factoring in everything from the carbon intensity of the fuels they use to whether plant maintenance activities may have driven a temporary spike in emissions.

“Left out of the study, notably, are emissions from all oilsands operations that use in-situ extraction, pumping steam into the ground to get the petroleum out. About 80% of oilsands reserves, and the majority of current production, require in-situ extraction,” which means “the overall amount of underreported greenhouse gas emissions could be significantly higher.”

When governments reverted to environmental self-regulation and reporting they put the fox in charge of the chicken house. Shame, time to repent and change the law. Withhold pipelines at least until this is corrected.

Meanwhile, Alaska’s governor is pushing on Trump for help in getting a railroad built from Alberta to a deep-water port in Alaska, for exporting Alberta tar sands bitumen to Asia. That needs to be nipped in the bud. See: https://www.adn.com/business-economy/2019/03/31/governor-asks-trump-for-permit-needed-to-connect-alaska-railroad-to-canada-lower-48/

Thanks for the link! We’ll be following this up…