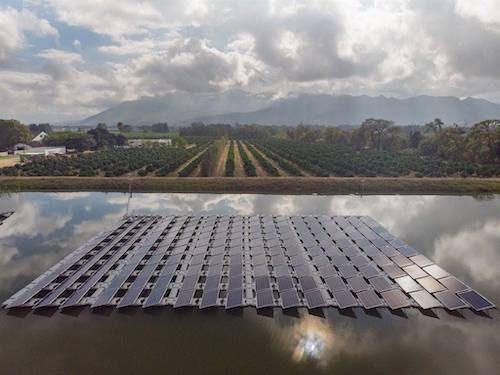 A company in The Netherlands has begun work on the world’s largest floating solar installation, a network of 73,500 panels on 15 islands on the Andijk reservoir in northern Holland that will have the ability to track the sun as it crosses the sky.

Construction of the first three islands, each of them 140 metres in diameter, is set to conclude in late November.

“The sun-tracking system involves three buoys for anchoring with cable around it, which turns the island and at the same time keeps the island together. It ensures the island is turned towards the sun,” explained Floating Solar Managing Director Arnoud van Druten. “You can have two options: one is tracking automatically to the light. But because the position of the sun is not expected to change too much in the coming years, an algorithm can be easily programmed.”

The ability to reposition the islands is also intended to help minimize the damage they sustain in severe weather. “Andijk is a very severe environment,” Van Druten told The Guardian. “So we have optimal solar tracking, which is generating extra energy, and weather risk management [WRM], which is a technology that makes sure that if an island is under severe pressure due to wind or storms, it moves itself automatically to a position so the wind and waves travel easily through the island.”

The system is designed to withstand winds of about 60 miles (100 kilometres) per hour without the WRM system.

The Guardian says the installation was driven by mounting resistance to large wind and solar installations on land, shaped by the need to protect aquatic ecosystems, and slowed by concerns about disrupting the local migratory bird season.

“There is a lot of pressure from environmental groups about wind turbines, so the alternative to land is water. But what does it do to the water quality?” Van Druten said. “Our design has the least impact on the ecosystem as possible so the water quality remains almost the same.” To avoid damaging the reservoir’s ecosystems, only half of its surface area will be covered by the islands, and the mobility of the islands themselves will help avoid permanent shadows.

As for bird migrations, “we would like to have started earlier, but because of the environmental issues regarding bird seasons, there is only a limited period in the year, these three months, that we can put anything in the water,” van Druten said.