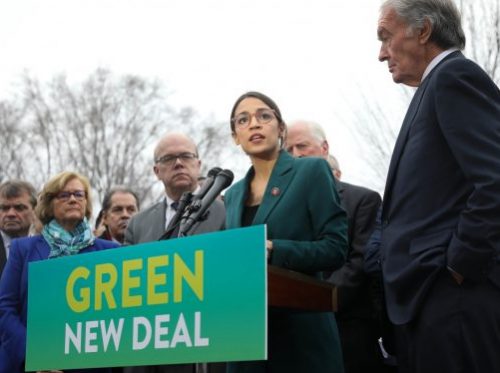 While the Green New Deal’s baked-in principles are laudable, it will be “getting real” and building on the growing bipartisan consensus on the urgent need for green energy that will beat Donald Trump in the 2020 U.S. federal election—thereby re-enlisting the U.S. in the fight against climate change, writes New York Times columnist Thomas L. Friedman.

“Given the choice between a ‘Green New Deal’ that envisions scaling justice for all and Trump’s ‘Black New Deal,’ which protects profitable pollution for the 1%, my heart is with the greens,” writes Friedman. But given the urgency of the climate crisis, most recently seen in the catastrophic loss and suffering sweeping Mozambique, Malawi, and Zimbabwe in the wake of Hurricane Idai, he argues that “you can’t transform our energy system and our social/economic one, at scale, all at once.”

And if a choice has to be made, “we have to prioritize energy/climate,” he adds. “Because for the environment, later will be too late. Later is officially over.”

With Trump and his base ramping up their attacks on the Green New Deal as the naïve fantasy of liberal elites and an instance of “creeping socialism,” Friedman says Democrats need to think hard and fast about their own strategy to win in 2020.

In a recent essay for CNBC, Moniz and Karsner praise the GND for “spark[ing] a timely, impassioned national conversation on the imperative of addressing climate change risks to our economy, environment, and security and the associated needs of disadvantaged communities,” but call for a “broader public consensus that respects local differences”. They say that approach would drive a “wise and just transition to a low-carbon economy, moving as fast as is technically and socially possible,” while minimizing “stranded physical assets as well as stranded workers and communities.”

With the urgent need to build consensus in view, writes Friedman, Moniz and Karsner’s Green Real Deal “would involve every state or city adopting its own version of a plan California approved last year called SB 100,” a legally-binding measure which “sets a steadily rising standard for California power generation companies: 50% renewables by 2026, 60% renewables by 2030, and 100% carbon-free—so as to include energy sources that aren’t actually renewable, but don’t emit carbon dioxide—by 2045.”

In addition to welcoming all non-fossil forms of energy (including nuclear), Friedman explains, “the steadily rising California standard guarantees they’ll all have a growing market to sell into.”

An approach that was responsive to regional differences, while being a money-maker and a job creator, “would put Trump totally on the defensive,” he asserts.

Further designed to knock the climate-denier-in-chief off-balance, says Friedman, would be a steady stream of ads asking viewers to take on the viewpoint of future generations: how their children hungry for work will view Trump’s enthusiasm for “big, beautiful coal,” or how their grandchildren will react to the knowledge that had carbon emissions been lowered in time, the world’s coral reefs might have been saved.