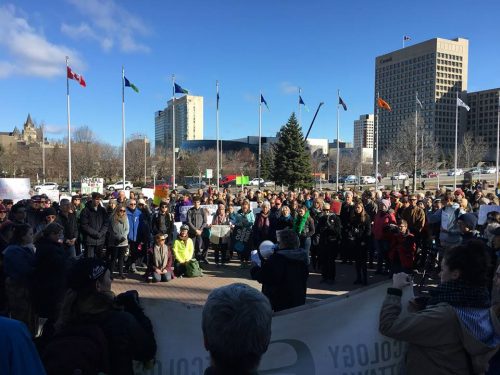 Ottawa City Council is on track to adopt a climate emergency resolution after the measure was adopted on a 6-2 vote by the city’s environment committee.

The eight-point resolution calls for the city to “officially declare a climate emergency for the purposes of naming, framing, and deepening our commitment to protecting our economy, our ecosystems, and our community from climate change.”

The details in the resolution committed councillors to a fairly robust plan of action, including aligning the city’s current climate target with a 1.5°C pathway, setting 2030 carbon reduction targets for city operations and the community as a whole, completing a community vulnerability assessment and resilience plan, and recognizing climate change as a strategic priority for the current term of council, which ends in 2022.

“The staff folks at city hall here, they want to do this, they are not dinosaurs who don’t believe in climate change,” said Councillor Shawn Menard, who introduced the measure. “They care about it, they believe it’s real, and they want support and help to change things.”

Committee chair Scott Moffatt contrasted the detail in Menard’s motion with less action-oriented versions adopted by some other Canadian cities. “If it was symbolic, it would not be here,” he said. “I wouldn’t let it get to this point.”

A couple of hundred people rallied outside city hall in support of the motion, and three committee members—Councillors Catherine McKenney, Keith Egli, and Riley Brockington—”were compelled by the voices of the young people who spoke out at a rally,” CBC reports. “If the kids and our youth are telling us this needs to be done, I think we should listen to them,” Egli said.

At the rally, Carleton University student Geena Schramm told CBC she remembered crying alongside classmates in Grade 4 when she first began learning about climate change. “Why can children understand the issue but not the people walking on the street, contributing to society?” she asked, adding that the resolution “would add a sense of urgency and seriousness to this issue, because it’s obviously been a lot of slow and gradual action to an issue that’s not slow and gradual.”

“This is the future for my kids, right?” said Diewke de Haen, who brought them both to the rally. “I hazard to think of the world they are going to grow up in. Twenty years from now, this world is going to be totally different, and it scares the heck out of me. I can’t think of anything more important to do today.”

Councillors Allan Hubley and George Darouze voted against the resolution after taking issue with the word “emergency”, CBC states. “To sit here around this table and say we’re in an emergency and the sky is going to fall, and put fear in the residents of the City of Ottawa, I don’t agree with that,” Darouze said.