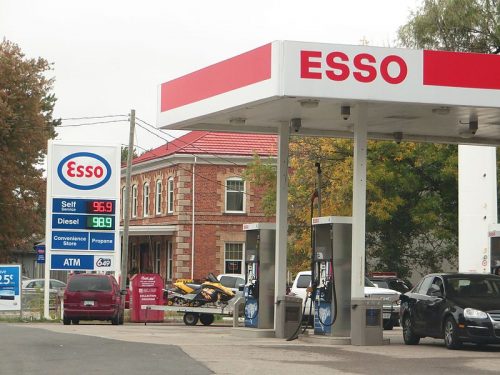 The Doug Ford government in Ontario is raising eyebrows with a provision buried deep in its recent budget bill that sets fines of up to C$10,000 per day for gas stations that refuse to display its new propaganda sticker attacking the federal carbon tax.

“The budget contains a new piece of legislation called the Federal Carbon Tax Transparency Act that would require gas stations to display the sticker on each pump,” The Canadian Press reports via National Observer. “The sticker shows the federal carbon tax adding 4.4¢ per litre to the price of gas now, and rising to 11¢ a litre in 2022.”

The bill “doesn’t require the stickers to provide information about the cost of climate change impacts, nor does it require the stickers to provide information about carbon rebates offered by the federal government as part of its plan,” CP notes. When Ottawa introduced its floor price on carbon last fall, it calculated that about 70% of people in the provinces where it applies would receive rebates—and that less well-off households would save more.

The legislation provides for provincial inspectors to check up on gas stations to make sure they’re displaying the stickers. Fines run as high as $500 per day for individuals and $5,000 for corporations, increasing to $1,000 and $10,000 on subsequent offences.

The plan earned a rebuke from the Globe and Mail editorial board, which acknowledged that Ford is “free to use his elected platform to oppose the federal carbon tax as much as he wants”, but not to oblige gas station owners to carry the message.

“Ontario’s Progressive Conservative Party is opposed to carbon taxes. We get it,” the editorial board stated. But “this is compelled speech, and it’s completely unacceptable. A government cannot force a business to become a medium for the transmission of a message that is self-evidently partisan,” conveying “propagandistic half-truths that mimic Ontario PC rhetoric by conveniently telling only part of the story.”

Democracy Watch co-founder Duff Conacher echoed the Globe, calling the stickers “propaganda” that “crosses a line into political vendetta by Doug Ford, as opposed to a public interest policy”.

University of Ottawa law professor Amir Attaran said the proposal is a “farce” that violates the Charter of Rights and Freedoms. “The government can mandate a no-smoking sticker because of public safety, but they cannot mandate a partisan political statement without destroying freedom of expression unconstitutionally,” he told CP.