Analysis: Alberta Misses Out on Grown-Up Conversation About Fossil Transition 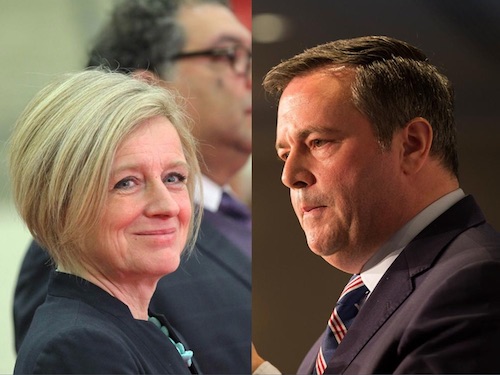 With Albertans voting tomorrow in the province’s 30th general election, most of the punditry and virtually every opinion poll reinforce the popular wisdom that rage at a failing fossil economy has made Jason Kenney’s United Conservative Party pretty much bulletproof and headed for a massive electoral win.

Before and during the campaign, the UCP endured multiple embarrassments, close associations with white supremacists, and an RCMP investigation into alleged voter fraud during its 2017 leadership convention. But the party has kept a steady, 10- to 12-point lead over the governing New Democrats, throughout a campaign when Kenney and Premier Rachel Notley seemed intent on outdoing each other as the oilpatch’s staunchest defenders.

What was missing in the mad scramble for votes was any realistic assessment of Alberta’s future in a carbon-constrained world, much less a reasoned plan for the province to thrive while its primary source of jobs and economic activity declines.

For all the attempts at dialogue and tangible project work—from solar to wind to energy efficiency to job retraining and more—that so many Albertans have worked so hard to put in place over the last four years, the campaign has had all the appearances of a race to the bottom of one of the province’s 3,000 (soon to be 100,000) empty oil wells. Entirely missing from the sense of fossil-fuelled entitlement emanating from both major parties has been the recognition that every jurisdiction needs a pathway to adapt and thrive in a decarbonizing economy. That every work force is entitled to be a part of that transition. And that the peril facing Alberta is multiplied, not averted, when its politicians insist on brazening it out rather than embracing the transition.

In last Friday’s Mix, we looked at whether a UCP government will bring Alberta any closer to the new pipeline construction that many voters evidently think it needs—or whether Kenney’s promise to repeal the provincial carbon tax will free Prime Minister Justin Trudeau from a bargain with Notley that has been a drag on federal climate action ever since. Late last week, a U.S.-based political risk analysis firm came to a similar conclusion.

“At this point, the Eurasia Group expects a Jason Kenney victory in the Alberta election. In the fall, it expects Prime Minster Justin Trudeau to be re-elected, a scenario that would ‘create further uncertainty in an already chaotic energy policy framework in Canada’,” CBC reports. The firm believes a showdown between Kenney and Trudeau would make “final resolution of key policy issues and project approvals harder to achieve.”

Some part of that caution is shared by people in the Alberta oilpatch who are “nervous” about seeing provincial climate policy regress, energy economist Peter Tertzakian of the ARC Energy Research Institute told CBC. “There’s definitely a segment of the industry pausing and thinking quite hard about the implications of dramatic policy reversals or policy implementations that are controversial,” he said.

“For Trudeau to approve the pipeline under these conditions would not only contradict his previous statements, he’d also likely be abandoning Canada’s Paris targets,” adds Andrew Leach, associate professor at the University of Alberta School of Business, who chaired the province’s 2015 Climate Advisory Panel. “There are many paths to meeting our national targets, but there is no credible path that includes a new pipeline and Alberta both reducing the stringency of its own policies and fighting the federal government’s means to impose policies nationally, as Kenney has pledged to do.”

On top of that, “imagine that Kenney, as premier of Alberta, is actively campaigning for Trudeau’s opponent in the upcoming federal election when Trudeau faces his decision. The prospects for the Trans Mountain pipeline get even more slim.”

And the political risks of cancelling his province’s carbon levy won’t be the only challenge Kenney faces. Amid the over-the-top rhetoric that dominated the campaign, more reasoned voices have pointed out that no Alberta premier will be able to restore the fossil industry to its former size or growth path.

“No policy of any Alberta government can change things,” said Simon Fraser University energy economist Mark Jaccard. “If Albertans are unwilling to accept a steady oilsands output, with the resulting employment, I fear for them.”

In a forthcoming paper, Jaccard sees less than a 5% chance that new tar sands/oil sands developments will be profitable over the next 30 years if governments uphold their commitments under the 2015 Paris Agreement.

The other problem for Alberta is that companies are “much more reluctant to invest capital in projects that require very, very high capital outlay and take years and years to pay back,” said Andrew Grant of London-based Carbon Tracker. “That encapsulates the oilsands.” Even without carbon pricing, he added, fossil demand is expected to peak early in the 2020s, with renewables meeting all the demand for new energy.

“They’re very high-cost, capital-intensive projects,” Grant said of the tar sands/oil sands. “Why would you invest in that when oil prices have been so volatile and there are demand threats on the horizon? I don’t think any sort of additional pipeline capacity can get around that issue.”

Even University of Manitoba energy analyst Vaclav Smil, who famously anticipates a slower, more gradual off-carbon transition and has apparently influenced Microsoft founder Bill Gates to expect the same, believes the fossil sector will feel the effects before the shift to renewables is complete. “All energy transitions are slow,” he said. “Oil will be with us for decades to come—but not necessarily with high annual growth rates.” (And even that assessment may be optimistic from fossils’ point of view.)

Kenney certainly hasn’t helped himself with the policy dilemmas ahead, with campaign rhetoric that picked fights with Alberta fossil CEOs and doubled down on deeply questionable carbon capture and sequestration technologies. But he wasn’t the only party leader who utterly failed to bring a dose of reality to the campaign, by acknowledging the challenges ahead or the opportunities Alberta could tap by embracing the transition off fossil fuels.

“Oil, a commodity that nurtures dependency, has so coddled the Alberta mind that it has fostered a provincial culture of victimization as poisonous as the identity politics unsettling university campuses,” writes journalist and analyst Andrew Nikiforuk on The Tyee.

“Every day the province’s oil-obsessed politicos warn Albertans that Canada is a dangerous place full of self-righteous climate activists (and some are indeed self-righteous), anti-pipeline protestors, dumb courts, stubborn First Nations, and nasty liberals,” he adds, in a post that also takes its shots at a “vindictive” Liberal government in Ottawa. “The province’s allergy to criticism has grown so formidable that United Conservative Party leader Jason Kenney proposes to set up a Saudi-like war room in the energy ministry to respond to any micro-aggressions and offensive material. Should it be called Snowflake Central?”

But Nikiforuk contends that “Kenney, a belligerent proponent of oil-safetyism, would much rather play the blame game than accept the truth that the rapid development of bitumen mining in Fort McMurray violated two fundamental principles of risk mitigation: go slow and save the money.” He continues with a detailed analysis of what’s gone wrong for Alberta in the way its fossil resources have been mismanaged—from the faulty gamble that oil prices would continue to rise, to the economics of competing shale oil production in the United States, to the propensity he sees in the province’s politicians and fossil executives to foster a victim culture rather than taking responsibility for those mistakes—much less for the 40,000 Alberta jobs lost as a result.

Then again, as Globe and Mail columnist Gary Mason recalled earlier this month, Kenney and Notley both saw what happened to then-Conservative premier Jim Prentice when he tried to tell the truth about the state of the province’s fossil-dependent finances during the 2015 election campaign.

“In terms of who is responsible,” Prentice said, “we all need to look in the mirror, right? Basically, all of us have had the best of everything and have not had to pay for what it costs.”

The comment went viral and helped sweep Notley to power, leading Mason to conclude in his more recent analysis that “in Alberta, there are many people who can’t handle the truth.”

Smart, resourceful, and tech-enabled a place as it is, “too many in Alberta want to believe that a new pipeline will fix all that ails the province,” Mason writes. “That’s a fantasy, one that even the political leaders running to govern the province understand (but won’t admit publicly). A new pipeline would provide a temporary fix, and it would stanch, for a few years, the fiscal bleeding that is taking place. But ultimately, all it would do is allow the government to return to using oil revenues to balance the books, allow a province to live beyond its true means for a few more years.” Which is precisely “the kind of short-sighted, insane politics that has landed the province in the trouble it is in today.”