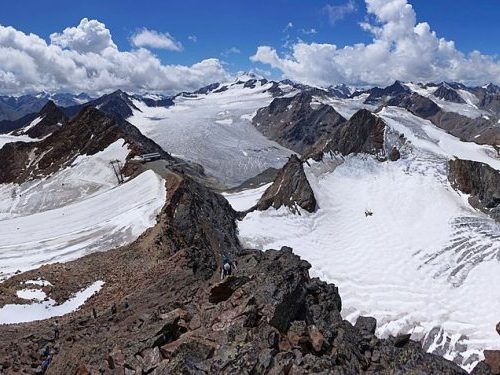 North America accounts for more than half of the 369 billion tons of snow and ice the world’s glaciers are losing each year, and the Alps are on track to see two-thirds of their glacier ice melt by 2100, according to two different studies released this week.

“The most comprehensive measurement of glaciers worldwide found that thousands of inland masses of snow compressed into ice are shrinking 18% faster than an international panel of scientists calculated in 2013,” The Associated Press reports, citing a study by the World Glacier Monitoring Service in Zurich, published this week in the journal Nature.

Overall, “the world’s glaciers are shrinking five times faster now than they were in the 1960s,” AP notes. “Their melt is accelerating due to global warming, and adding more water to already rising seas.” The hardest-hit regions, with average ice mass loss of more than 1% per year, include central Europe, the Caucasus region, western Canada, the Lower 48 U.S. states, New Zealand, and near the tropics.

“In these regions, at the current glacier loss rate, the glaciers will not survive the century,” Zemp said.

In the Alps, “half of the ice in the mountain chain’s 4,000 glaciers will be gone by 2050 due to global warming already baked in by past emissions,” The Guardian states, citing a paper released Tuesday in the journal The Cryosphere. “After that, even if carbon emissions have plummeted to zero, two-thirds of the ice will still have melted by 2100.”

If greenhouse gas emissions continue unabated, “the ice tongues will have all but disappeared from Alpine valleys by the end of the century,” the UK-based paper adds. “The researchers said the loss of the glaciers would have a big impact on water availability for farming and hydroelectricity, especially during droughts, and affect nature and tourism.”

“Glaciers in the European Alps and their recent evolution are some of the clearest indicators of the ongoing changes in climate,” said study team member and ETH Zurich glaciologist Daniel Farinotti.The Guardian coverage refers to a study earlier this year that showed the Himalayas losing one-third of their glacier ice by 2100 in the best-case scenario for GHG emissions. Late last year, Canada’s first-ever State of the Mountains report concluded that Alberta, British Columbia, and Yukon could lose up to 80% of their mountain glaciers over the next half-century, as rapid warming brings a combination of less snow and accelerated melting.