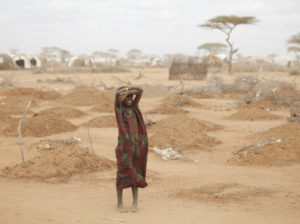 It will cost three key regions of Africa as much as US$487 billion in energy use by 2076 to deal with increased heat stress if the world’s governments fail to live up to their commitments under the Paris Agreement, according to a new modelling study reported in the journal Climatic Change.

The study by atmospheric scientists from the United Kingdom and France placed the cost of the additional cooling at $51 billion by 2035 if average global warming exceeds 2.0°C, and $487 billion by 2076 if average increases surge beyond 4.0°C.

While “previous studies have examined the impacts of climate change on heating and cooling demands using degree days with set target temperatures, and project significant impacts at the regional scale,” the authors write, the latest study is the first to examine “the costs of mitigating heat stress through increased space cooling specifically”— the kind of cooling that will be necessary to shield millions of poor people, the very young, and the very old from death through heat exhaustion.

Using multiple simulations, the researchers found that a combination of rising temperatures and changes to rainfall patterns “are projected to increase the intensity of heat stress events in Sahelian Africa and introduce new heat stress events in Northern and Central Africa.” Those events will demand ever-increasing amounts of energy-intensive cooling in the form of ceiling fans and, especially, air conditioners.

The study team said it arrived at its cost figures by combining data from the multinational High-End Climate Impacts and Extremes (HELIX) project with a “least-cost energy system optimization model to project the change in energy demand for space cooling and the associated costs of mitigating heat stress.” They found that “the greatest increases in cooling demand will occur in countries with densely populated regions, most notably Nigeria,” while “supplying this additional cooling demand will present the greatest challenge to less developed countries like Somalia.”

The authors explain that heat stress, defined as “the inability of a body to cool sufficiently to maintain a stable internal temperature,” is of particular concern in tropical jurisdictions, and especially in coastal cities which are “particularly susceptible to changes in heat stress as evaporation from the sea increases the water vapour pressure, which is a key component of heat stress.” However, even cities far from the oceans can anticipate increasing frequencies of heat stress, thanks to the urban heat island effect.

Already a fearsome threat to human and animal health, heat stress has been directly linked to declines in GDP, as workers’ reluctance to enter lethally hot industrial workplaces cuts into economic productivity. Citing a 2015 study, the authors of the latest study write that “almost every country in Africa is vulnerable to increasing temperatures causing a reduction in gross domestic product.”

And weakened economies, they add, are precisely what countries throughout the ever more densely populated Sahel do not need as they grapple with escalating investment and operating costs to ensure that their energy grids continue to keep life-saving fans and AC units running.

The study calls for further research into the impacts of heat stress, noting that because the phenomenon coincides with heat waves, “there is potential that there will be competition between electricity generation, drinking water demand, and irrigation for limited water.”