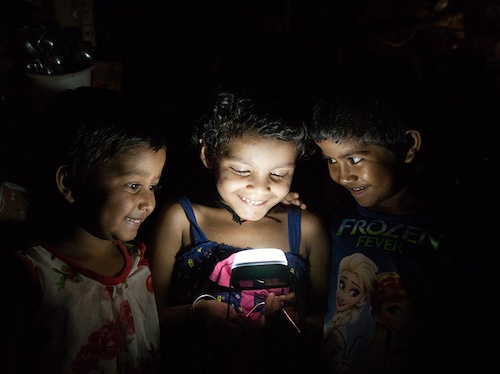 A pair of Silicon Valley entrepreneurs has raised just over US$100 million on a mission to make renewable electricity available to 2.3 billion people.

Ned Tozun and Sam Goldman, co-founders of Berkeley-based d.light design inc., got their start with Tozun’s realization that a large share of the world’s population has no access to power—and that conventional private markets weren’t addressing the problem. “With such a huge market size, this was a multi-billion-dollar opportunity,” Forbes reports. “But, in the beginning, not many investors were interested in what they saw as a high-risk, unproven proposal.”

“You guys will fail,” one potential investor told them. “Please don’t waste your life on this.”

The business magazine spins out d.light’s success story, with an initial venture capital grant that made the rest of the company’s fundraising easier. Fast forward a decade, and the company says it is on track to touch 100 million lives by the end of this year.

“Their solar-powered solutions–which include lights, phone chargers, radios, and even televisions–are sold in over 60 countries,” Forbes states. “The social enterprise has 1,000 employees and 3,000 to 5,000 commissioned agents, is generating about $100 million of revenue a year, and experiencing 40 to 50% growth annually.”

“Even in very early days,” said Tozun, “sometimes entire villages would go from being in the dark to being totally upgraded to solar-powered lights. The impact for these families when you go from having no light at night or kerosene light to bright, solar-powered lighting is kids study longer .There are more productive hours of use. People can keep their shops open longer. They can make more income. There are all sorts of benefits for these families. We saw the transformation in these communities.”

Forbes says Tozun and Goldman learned their craft by committing to the parts of the world where they wanted to build their market and make a difference. After the first two chunks of financing came in, Tozun and his wife moved to China “to figure out how to build solar-powered solutions that were affordable, high quality, and at scale,” while Goldman relocated to India to map out a sales and distribution strategy.

“The need was clear,” Forbes notes. “The customers were excited about the products and were willing to pay for them. It was just a matter of getting the pricing right and delivering the solutions at scale.”