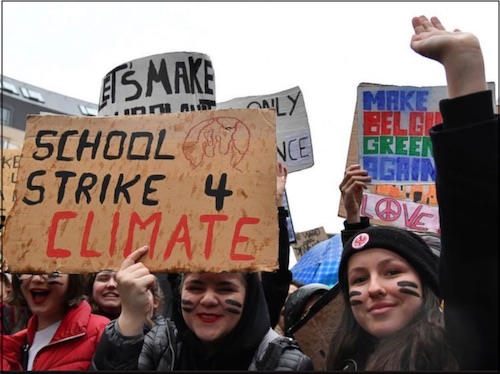 Parents and grandparents from 16 countries across four continents have issued an open letter launching a new organization, Parents for the Future, and calling for a mobilization in support of the #SchoolStrikes that brought 1.4 million students from 128 countries out of classes March 15 in a massive call for climate action.

The Guardian says Mothers Rise Up is planning a march in London, England on Mother’s Day May 12, and similar protests are expected in other countries.

“What our kids are telling us is what science has been telling us for many years—there is no time left,” says the letter from 34 separate parent groups from the United Kingdom, Germany, the United States, Australia, India, and South Africa. “We now owe it to them to act.”

The letter adds: “Parents—we are everywhere in society: in classrooms as teachers, in fields as farmers, in factories as workers, in hospitals as healers, in boardrooms as CEOs, in legislatures as policy-makers. We have the power to build this safe, just and clean future for our kids.”

“Although this is an event created by mums, it isn’t just for mums,” organizer Becky Wynn said in London. “We are calling anyone who is moved by the love of a child to join—fathers, grandparents, aunties, uncles, child minders, and friends. We are all custodians of our threatened home.”

“If we don’t act for our own children, who will?” added Helene Costa of Parents For Future Seattle. “What we are seeing through the global youth mobilization and this international letter from parents is the emergence of a transnational conscience around climate actions. That makes me very hopeful.”

“Climate change will make my kids’ lives much harder than my life has been in many ways.,” said Eve White of Australian Parents for Climate Action in Tasmania. “This is incredibly unfair, especially as scientists have been warning us about this for decades and the solutions are available. So why aren’t we acting—urgently?”

“My government needs to urgently focus on climate breakdown and the role of trees, coal, construction, and their impact on our air and water, as well,” said parent organizer Bhavreen Kandhari in New Delhi. “Our children are going to pay the price for our mistakes, and that is not acceptable to me.”

“Currently, we are seeing a world that not only will very likely be worse for our children, but potentially uninhabitable,” said Tim Habraken in Rotterdam. “We should ask: when our children hold us accountable in the future, and ask us what we did, can we live with ourselves?”