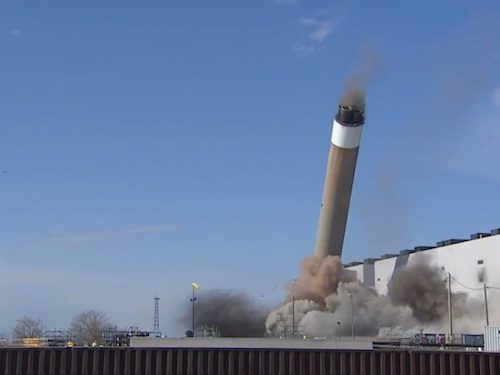 The solar farm on the former site of the Nanticoke coal-fired generation station has gone into service with precisely 192,431 solar panels across 460 acres sending 44 megawatts to the Ontario grid, marking the one-year anniversary of the demolition of the plant’s 650-foot smokestacks.

The project was a joint venture of the Six Nations of the Grand River Development Corporation, the Mississaugas of the Credit First Nation, and Ontario Power Generation, Mining.com reports. Edmonton-based PCL Construction designed, engineered, and built the installation, and supplied the photovoltaic panels and racking system.

“In its heyday, the Nanticoke Generating Station was the largest coal-fired plant in North America, providing 15% of Ontario’s electricity,” Mining.com recalls. “After serving the province for more than 40 years, it stopped using coal as fuel in 2013. Two years later, the site was safely closed while the switchyards, operated by Hydro One Networks, remain in operation as a significant hub for the electricity grid in the southwestern part of the region.”Ontario completed its coal phaseout in 2014, after a 17-year effort by a broad coalition of environment, energy, and health advocates. To this day, the phaseout stands as North America’s biggest single greenhouse gas reduction to date [if anyone has broken the record by now, please let us know!—Ed.], the equivalent of taking seven million internal combustion cars off the road.