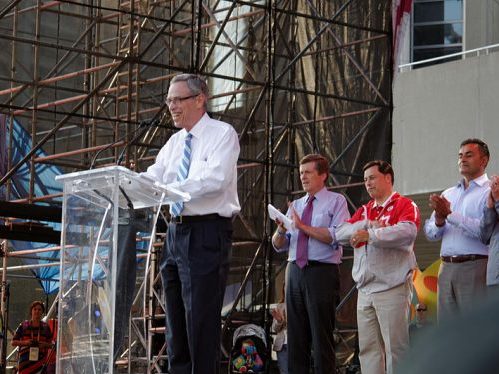 Doug Ford’s government in Ontario has named Joe Oliver, a former federal natural resources and finance minister described by National Observer as one of Canada’s most notorious climate deniers, to the board of the body that oversees the province’s electricity grid.

Energy Minister Greg Rickford, who served with Oliver in Stephen Harper’s cabinet and followed him into the federal natural resources portfolio, announced the appointment to the Independent Electricity System Operator (IESO) board in a release last Thursday.

“Joe has shown an unwavering commitment to public service and has enjoyed a distinguished career in financial services,” Rickford said. “The IESO is the heart of Ontario’s power system, ensuring there is enough power to keep the lights on, today and into the future, and Joe will be a great addition to the team.”

The announcement comes with Ford’s Conservative government “under fire for slashing policies to address climate change and criticizing the federal government for requiring polluters to pay a tax for contributing to the problem,” Observer notes. “Peer-reviewed scientific research shows that climate change threatens to cause irreversible damage to the Earth’s ecosystems and its economy.”

In June 2016, Oliver called the former Liberal government’s climate plan “a useless intrusion in our lives” that would “infringe on people’s freedom, impose debilitating costs, set impossible targets, and fail to produce meaningful reductions in GHG emissions.” He added that “a profound belief that climate change will doom the planet does not give licence to pursue unworkable policies at great cost. To the contrary, the result of this dysfunctional plan will be a missed opportunity to do something effective.”

Then in 2018, he claimed that efforts to reduce fossil fuel use and mitigate climate change are based on beliefs that are “grossly exaggerated or simply false,” Observer adds.

The day before his appointment was announced, Oliver’s latest opinion piece in the Financial Post claimed that “the evidence simply does not substantiate the apocalyptic prophesies.” Observer’s excerpt reads like a hit parade of the latest climate denial myths:

“The climate is always changing. Doubling greenhouse gas (GHG) emissions increases the temperature by 1.1°C and secondary effects have not multiplied that number. Increased GHG makes plants more drought resistant and increases arable land. Human beings contribute to raising emissions, but it is unclear how much warming is anthropogenic. Extreme weather events have not increased, according to the IPCC. There is no satisfactory explanation for why temperatures have risen, fallen, and remained flat during the last century of steadily increasing emissions. Since our grasp of climatology is obviously imperfect, we cannot claim that the science is settled.”

Observer notes that “Oliver’s claims aren’t consistent with peer-reviewed scientific evidence. Climate change is real. Greenhouse gas emissions produced as a result of burning fossil fuels like oil and gas for home heating and transportation have contributed to raising the Earth’s temperatures. This has in turn led to severe weather events like forest fires, heat warnings, harsh winters, and more serious rainstorms.”