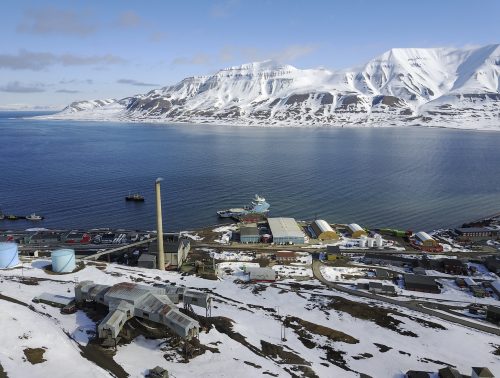 The Global Seed Vault in Norway, intended as “the ultimate failsafe for biodiversity of crops,” is now threatened by rapid warming in Longyearbyen, the town on the island of Svalbard that is the world’s northernmost community with 1,000 or more residents.

“Northern temperatures and environment on the island were a major reason for the construction,” Commons Dreams reports, citing an in-depth story by the Cable News Network. “Project planners hoped that the permafrost around the construction of the underground vault would, in time, refreeze.”

But just over a decade after the Seed Vault opened, “the planet has other plans.”

The problem is that Longyearbyen has already warmed by 3.7°C, faster than any other town on Earth, CNN explains. The result is open water on fjords that previously had a metre of ice, starving reindeer, and changes in local cod species.

“A landscape of jagged mountains, fjords, and glaciers, Svalbard—which experiences four months of darkness in winter, and four months of daylight in summer—is built on permanently frozen ground called permafrost. For years, permafrost provided a base as hard as concrete. But now it’s melting—and that’s proving to be a problem,” with buildings damaged and sinking into the softening soil.

Moreover, “the weather hasn’t only got hotter, it’s also got wetter,” the U.S. television network adds, citing a study led by Inger Hanssen-Bauer, senior researcher at the Norwegian Meteorological Institute. “In the late 20th century, annual rainfall in Longyearbyen was about 200 millimetres (7.9 inches),” but “in the past decade, the town has suffered occasional torrential downpours of 50 millimetres (2 inches) of rain in a day.”

Those changes “could endanger the lives of Longyearbyen’s residents, is starving the animals that live in its hinterland, and has imperiled an institution which safeguards the world’s crop supply.” Elsewhere in town, on one winter day in 2016, high waves washed away 13 metres (43 feet) of shore.

“Many of Longyearbyen’s buildings are vulnerable because they are built on wooden pillars sunk into the permafrost. In the new climate, the pillars become wet and start to rot, destabilizing the houses,” CNN notes. “Most dangerous of all, though, are the avalanches, which are more likely to occur with heavy rain and degraded permafrost.”

One of the buildings at risk is the seed vault, which “stores copies of the world’s crop seeds. It was created to act as a back-up in case of catastrophes such as disease, pests, war—and climate change,” writes reporter Sarah Lazarus. “The vault holds nearly one million packets of seeds originating from almost every country in the world, including everyday staples such as wheat and rice, as well as rare species such as the critically endangered Bermuda bean.”

Longyearbyen was seen as the ideal spot for the vault, in an area not prone to volcanoes or earthquakes and a country that is politically stable. “But as soon as the seed bank opened, it became clear there were going to be problems,” Lazarus recounts, citing Marie Haga, executive director of Crop Trust, which built the seed vault. “Typically, permafrost that is disturbed by construction work will refreeze over time.” But the ground around the vault’s entrance tunnel never did.

When half of the tunnel floor flooded in a heavy rainfall in October 2016, the vault wasn’t affected, but “we knew action had to be taken,” Haga said. The refit cost NOK 100 million (US$11.7 million), more than twice the cost of the original project.

But that’s just an initial response, with average temperatures for Longyearbyen expected to increase by 7.0 to 10.0°C and rainfall projected to rise 40 to 65% by 2100, depending on future greenhouse gas scenarios. “The brutality of nature used to bring joy, but now it scares people,” said Kim Holmen of the Norwegian Polar Institute.