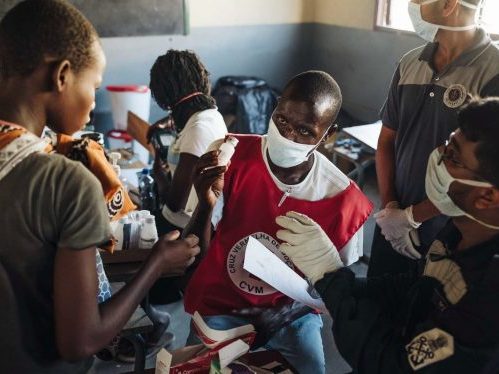 Half a month after Cyclone Idai ripped through parts of Mozambique, Zimbabwe, and Malawi, destroying 90% of the port city of Beira, the numbers that trace the devastation are continuing to mount: At least 738 dead with many more missing, an estimated three million people affected and 1.8 million in urgent need, 136,000 displaced and 50,000 homes destroyed in Mozambique alone, and deadly disease spreading quickly to people with no choice but to drink contaminated water.

Confirmed cases of cholera in Beira “jumped from five to 138 on Friday, as government and aid agencies battled to contain the spread of disease among the tens of thousands of victims of the storm,” Reuters reports. “Many badly affected areas in Mozambique and Zimbabwe are still inaccessible by road, complicating relief efforts and exacerbating the threat of infection.”

And while there had been no confirmed cholera deaths in medical centres in Mozambique as of Friday, Environment Minister Celso Correia said at least two people died outside hospitals with cholera symptoms, including dehydration and diarrhea.

“We expected this, we were prepared for this, we’ve doctors in place,” Correia said.

“You know, cholera is an epidemic situation,” added Ussene Isse, Mozambique’s national director of medical assistance. “When you have one case, you expect to have more cases in the community.”

“Stranded communities are relying on heavily polluted water,” the International Committee of the Red Cross said in a prepared statement. “This, combined with widespread flooding and poor sanitation, creates fertile grounds for disease outbreaks, including cholera.” The World Health Organization (WHO) expected to deliver 900,000 doses of oral cholera vaccine today.

“Cholera is endemic to Mozambique, which has had regular outbreaks over the past five years,” Reuters explains, citing the WHO. “About 2,000 people were infected in the last outbreak, which ended in February 2018.”

But “the scale of the damage to Beira’s water and sanitation infrastructure, coupled with its dense population, have raised fears that another epidemic would be difficult to put down.”

In Beira, The Associated Press reports that Mayor Daviz Simango had plans to protect the community from climate change. The project was supposed to bring “the end of suffering of a whole population,” said Simango, a civil engineer who personally oversaw some of the work, when the first phase was complete.

But then the cyclone hit.

Delivering on the mayor’s promise “would be a huge challenge,” AP notes. “Large parts of the city of 500,000 residents are below sea level on a coastline that experts warn is one of the world’s most vulnerable to global warming’s rising waters.”

But “with the World Bank’s support, a US$120-million project was approved in 2012 to help spare the city’s fading Art Deco centre and makeshift slums from rising waters. An 11-kilometre (seven-mile) system of drainage canals and water retention basins now snakes from the beach deep into boggy neighbourhoods.”

And it looked like it might work, until Idai “brought a whole new level of pain to Beira, with images of destruction to chill any seaside nation already fearing for its survival,” with winds up to 240 kilometres (150 miles) per hour that “ripped apart structures built to withstand less than half that intensity.”

“We were really well prepared for disasters like flooding,” Simango told AP. But “this cyclone destroyed everything we built for more than 100 years.”

“Yes, we were doing the right thing but it was not enough,” said Michel Matera, a senior urban specialist with the World Bank. “Suddenly we have a cyclone category 4 hitting, and it’s very vulnerable.”

Simango “called it unjust that African nations face some of the toughest challenges while contributing little to global warming. People in rich, industrialized nations produce much of the carbon dioxide and other gases that are warming the planet by burning the most coal, diesel, gasoline, and jet fuel,” AP states.

“But while Simango believes the international community should help African nations, he stressed the continent’s leaders must do their part to fight graft and not pocket the aid.”

“Sometimes we get money, resources, but the corruption kills us,” he said. “We must be more prepared as leaders, doing our best to use every cent to save lives.”

As if to illustrate the point, the New York Times was out with a report last Tuesday from a meeting in the capital Maputo, five days after the cyclone hit, in which participants discussed the $150 to $167 billion Mozambique could take away over the next 30 years from natural gas megaprojects proposed by colossal fossils ExxonMobil and Anadarko Petroleum.

“I was in an air-conditioned office here in the capital with a group of bankers and oil industry executives, hearing about how rich and happy Mozambicans would soon be,” writes energy reporter Leigh Elston. “We observed a minute of silence for the victims of the flood. What was not observed was the possibility that climate change, driven by the oil and gas industry, had any responsibility for the natural disaster.”

Mozambique certainly needs the money, Elston notes. And the government revenue attributed to the Exxon and Andarko projects in a report by Standard Bank would be enough to hire 850 doctors and 17,600 teachers, build 3,200 affordable homes, and fund 4,000 hospital beds per year. It would also be enough to rebuild Beira and Buzi, a city of 200,000 now submerged in floodwaters, and “fund a proper climate risk management and resilience program, which would be able to provide better warning of disasters, giving people time to evacuate, and improve rescue and relief efforts. It could finance the building of houses, schools, hospitals, and roads better able to withstand storms and flooding.”

But it isn’t that simple. “Weak state institutions and low government accountability make Mozambique vulnerable to the ‘resource curse’—when a dependence on natural resource revenues leads to higher rates of conflict and corruption and a decline in democracy and economic growth,” Elston notes. Even before the cyclone hit, the country was seeing increased violence and corruption.

CBC links that problem back to the limited and insufficient aid Mozambique has received so far from other countries. “International aid organizations acknowledge the immediate needs far outstrip what global donors have delivered or promised so far,” the national broadcaster states. “Some ascribe the shortage in funding to widespread international distrust of Mozambique’s government due to high levels of corruption in the country.”

Simango said it’s time for world leaders to take the climate crisis seriously, urging Donald Trump to come to Mozambique and see the impacts for himself. “I think he is living in another world,” he said of Trump’s climate denial. “I’ve seen by my own eyes the rising of the sea level. I’ve seen by my own eyes people suffering. I’ve seen flooding. Climate change is a reality. Climate change is bringing us trouble.”

United Nations Secretary General António Guterres stressed that developed countries must develop on their promise of US$100 billion by 2020 to help developing countries prepare for climate change.