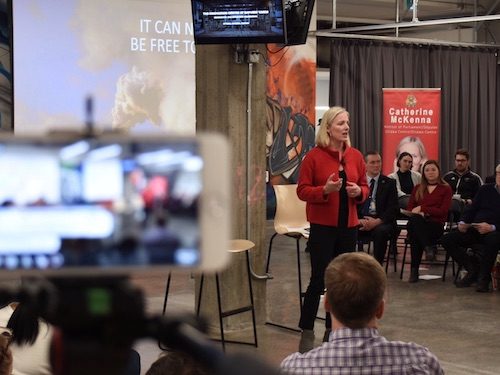 The federal government is leaning toward supporting tougher fuel economy standards against Trump administration rollbacks, and is about to announce incremental progress on curbing fossil fuel subsidies, The Energy Mix learned Thursday evening, during a town hall hosted by Environment and Climate Minister Catherine McKenna.

Ottawa is planning two releases next week, McKenna told the public session in her home riding of Ottawa Centre: a call for input on some of the detailed issues arising in the discussion of a subsidy phaseout, and a major science report on climate impacts in Canada.

The report will show that “we need to adapt right now,” she said, citing flooding as the biggest short-term climate risk the country faces. “City planners need to think about these things. What happens if we have more power outages because it’s so hot? What are the impacts on vulnerable populations? What is the impact of flooding? What are the impacts of Zika (virus)?” Canadians face a “huge number of impacts of climate change, and we need to be more resilient and build in a more resilient way.”

As for the White House battle with California and 13 other states over its plan to freeze U.S. fuel economy standards at 2020 levels, “whatever Trump does, it’s extremely important that we have a stringent standard,” McKenna said. “California has a standard and it works, so I think that’s really important as we transition.”

When then-Environmental Protection Agency administrator Scott Pruitt announced the rollback last April, Canada immediately faced calls to align its standards with the so-called “177 states” that adhere to the tougher California rule. “It is obvious that this announcement from the U.S. EPA must trigger the beginning of a review to separate our GHG emissions regulations from those of the U.S.,” Équiterre Government Relations Director Annie Bérubé said at the time. “We must ensure that the current stringency of the GHG emissions regulations for passenger vehicles is maintained in Canada.”

Last night, a McKenna spokesperson said discussions between the U.S. and California are still in progress. Once they’ve run their course, Canada will have to decide whether to keep its rules tied to the U.S., go it alone, or match up with the California standard.

“It’s very difficult to commit to which path until California and the U.S. figure out where they land,” the spokesperson said. But “we do not feel this is the time to roll back” the standards. “We are very seriously looking at what California is doing and where they are going to end up.”

On fossil subsidies, the spokesperson told The Mix that next week’s announcement will dig into the details of how to define “inefficient” subsidies, a decade after the G20 agreed to the phaseout, and nearly 18 months after then-auditor general Michael Ferguson warned the country was falling behind because it hadn’t tied down some of the key terms involved.

“Canada pledged to phase out fossil fuel subsidies by 2015 at a G20 meeting in Pittsburgh in 2009 and has repeated that promise every year since,” iPolitics reported at the time. But despite some positive movement, “Finance Canada and Environment Canada haven’t clearly defined what the promise means, leaving doubts about whether the promise is being met.”

Some of those uncertainties centre on how to define the word “inefficient”. McKenna’s spokesperson cited funding for diesel generators in remote Indigenous communities as an essential social benefit that will be necessary until the systems can be phased out, but might well be defined as a fossil subsidy.

During the town hall, McKenna also mentioned carbon capture and storage technology as a funding area that might or might not be included in the subsidy discussion, with a couple of participants shouting out that it most certainly did. The spokesperson noted that most [though not quite all—Ed.]international studies of 1.5°C pathways assume CCS as a necessary part of the solution.

“So does one support investment in technologies that reduce emissions in the fossil fuel sector during the transition?” he asked. “At this stage, we need to hear more from Canadians”, en route to completing the phaseout by 2025.

The spokesperson said the 600- to 700-page climate impacts report is a “pretty expansive and dire outlook on the impact of climate change,” from forest fires and drought to heat waves and flooding.

During the town hall, McKenna faced tough questions on issues ranging from tar sands/oil sands emissions and delayed methane regulations to oil and gas drilling off the coast of Nova Scotia, from mercury pollution at the site of the Muskrat Falls hydroelectric project to the federal government’s C$4.5-billion purchase of the Trans Mountain pipeline, from fossil fuel subsidies to the $3.9 billion the federal budget extends to traditional farm operations with high carbon footprints. Members of Extinction Rebellion held a mock die-in, hoisting banners that declared a climate emergency and listed the major fossil projects the Trudeau government has supported.

McKenna said she welcomed the public protests calling for faster, deeper carbon cuts, including an emerging effort to persuade Ottawa City Council to declare a climate emergency, and expressed support for Canadian policies akin to the Green New Deal resolution in the United States. But she noted that she would have faced different and more intense criticism if she’d held a town hall in Alberta, stressing that the transition off fossil fuels also has to work for people who are concerned about losing their jobs, communities, and livelihoods.

“Absolutely, 100%, we need to do more, and people in the streets need to say that so I can fight against governments that want to do less,” she told participants. But while acknowledging several times that she didn’t expect everyone in the room to agree with the government’s climate performance to date, she insisted it does no good to push stronger policies that are  simply rolled back when a government is defeated.

“We’re trying to consolidate what we’ve committed to,” McKenna said. “But we have an election coming up. Absolutely, we should be talking about a Green New Deal and being more ambitious. But if you get a Conservative government, what are you going to get? Nothing. You’re going to lose everything.”