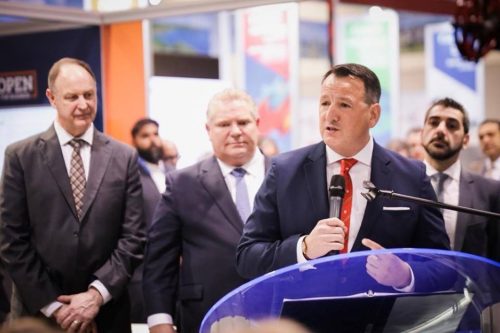 The cuts were first revealed last Wednesday in an exclusive report by National Observer. “The changes would affect the Save ON Energy program, which was designed and launched in 2010 in an effort to help Ontario residents save energy and money, and reduce the province’s carbon footprint,” Observer reported. “Industry sources confirmed that most, if not all, local energy incentive programs are expected to be cut, which will in turn cause job losses in Ontario’s energy sector.”

A day later, the Globe and Mail said the cutbacks will include “subsidies for modern lighting, such as LED bulbs, more efficient air conditioners and furnaces, and upgrades to commercial refrigeration equipment. The government will also centralize the delivery of eight programs aimed at businesses, low-income seniors, and First Nations communities; they will now be run by the Independent Electricity System Operator (IESO) rather than local utilities, which will lose $150 million a year in bonus payments.”

The Globe says the cuts “are expected to save C$442 million over three years in a system that generates revenues of more than $21 billion a year.”

As for the 12% electricity rate reduction that Premier Doug Ford promised during the 2018 provincial election, Energy Minister Greg Rickford said the government now plans a “measured, systematic approach” to cutting costs for consumers, after acknowledging that the energy efficiency cuts will only generate modest savings. “For now, the government has ordered the Ontario Energy Board to hold any increases to the rate of inflation, though local utilities have already filed their rate requests for next year and are typically asking for an annual increase of less than 2%,” the Globe states.

“Critics say the government’s cuts will ultimately mean greater usage and higher costs for households, businesses, and public sector institutions such as schools and hospitals,” the Globe adds. “The previous government had pursued a ‘conservation first’ policy that aimed to keep a lid on electricity demand in order to reduce the need for expensive new sources of power in the future. While the province currently has a surplus of capacity, the IESO has warned it faces a shortfall for peak-hour demand as early as 2023.”

“Energy efficiency is the best bang for the buck for the people of Ontario,” said Efficiency Canada Executive Director Corey Diamond. “Saving a kilowatt-hour is cheaper than spending to generate one. Cuts to energy efficiency programs mean reducing the lowest-cost option in our electricity system.”

The Ontario Clean Air Alliance says the cuts will replace the province’s lowest-cost source of energy services with the most expensive.

The province “says it will save on costs by axing things like incentives for higher-efficiency lighting, furnaces, and air conditioners,” writes Director Angela Bischoff. “What it fails to note is that Ontario’s conservation programs have the lowest costs of any option for meeting our energy needs—just 1.7¢ per kilowatt-hour. Eliminating these programs and the energy savings they generate will just require greater reliance on high-cost nuclear plants, where the cost per kilowatt-hour will hit 16.5¢ by 2025.”

The provincial announcement “will hurt consumers without leading to any decrease in electricity costs because energy efficiency is the lowest-cost way to meet our energy needs,” Bischoff adds. “And Ontario’s programs are highly cost-effective, generating about $2.50 in savings for every dollar spent.”