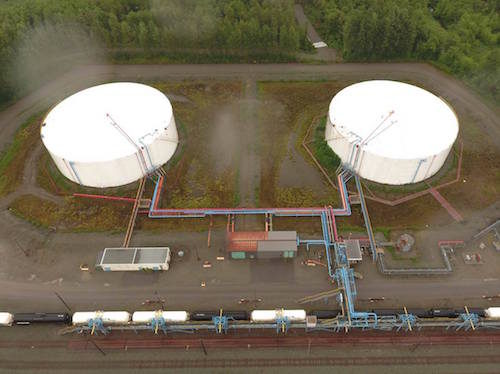 Canadian natural gas producers are scrambling to avoid the price disadvantage hobbling the country’s tar sands/oil sands industry, working on “a flurry of export and chemicals projects to avoid the same fate,” Bloomberg reports, in a post republished by JWN Energy.

“Canada’s natural gas has long sold at a discount to the U.S. benchmark, due largely to the cost of transporting the product to distant markets in the south,” Bloomberg notes. “But in recent years, growing output from the prolific Montney formation has swamped pipelines, causing the discount to widen.”

That situation “mirrors the predicament of the nation’s oil industry, where production overtook pipeline space, hammering prices down to record lows and prompting an unprecedented intervention from Alberta’s government,” the news agency explains. While gas producers are “working overtime to escape a similarly bleak future,” data compiled by Bloomberg shows gas selling at record-low prices in the U.S.

“Just as the oil producers are struggling to get their product to market, the Montney has got a great resource with no easy way to access markets,” said RS Energy Group Director Jen Snyder. So gas producers are working on a range of alternatives, from liquefied natural gas (LNG) exports to plastics and petrochemical production.

The C$40-billion LNG Canada megaproject, already expected to blow a massive hole in British Columbia’s carbon budget, won’t bring much relief to the gas business as a whole, since the project will be supplied almost entirely by members of the consortium led by Royal Dutch Shell. But Bloomberg says a group of 10 natural gas companies, representing 20% of Canada’s production, have hired a consulting team to evaluate options for a new LNG export facility on the Pacific coast. Options could include supporting an existing LNG project or restarting work on a dormant proposal.

“The reality is no one else is going to do this for the producers,” said Greg Kist, former president of the now-defunct Pacific NorthWest LNG project, who’s been brought in to lead the consulting team. “Producers recognize that they have a price risk in western Canada, and they’re prepared to move that price risk onto a boat. So, really, it’s about diversifying the portfolio of markets that producers can access.”

Bloomberg lists several other projects that could generate demand for Montney gas:

• Inter Pipeline Ltd.’s $3.5-billion petrochemical plant in Edmonton, which will turn propane into 525,000 tons per year of polypropylene beginning in 2021;

• A $4.5-billion propane dehydrogenation plant, to be developed by Pembina Pipeline Corporation and Kuwait’s Petrochemical Industries Co. for a 2023 start;

• An $8.6-billion pipeline expansion in which TransCanada Corporation plans to add 3.2 billion cubic feet of capacity to its western Canadian gas system by the end of 2022.