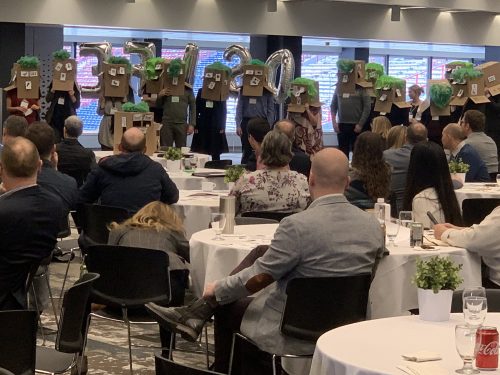 With the Alberta election campaign taking on the look and feel of a brutally divisive, month-long political brawl, a couple of recent news reports have focused on new strategies seeking common ground on the province’s shift to a post-carbon future.

CBC opened a post over the weekend with an account of a “moving conversation”, hosted by the Energy Futures Lab, where individual participants were asked to make a statement about energy, pipelines, or climate change, then the rest of the group was invited to move nearer or farther from them, to express agreement or disagreement with what they’d just heard.

“Here’s something you don’t see every day,” the national broadcaster reported. “A hundred or so Albertans from different parts of the energy sector, from oil and gas to renewables, playing a game together.” The purpose of the exercise: “To get people with very different opinions about controversial topics, such as pipelines and climate change, to actually listen to one another.”

“One of the things we believe in the Energy Futures Lab is that a diversity of views and ideas about energy is a benefit—not a challenge,” said session facilitator and EFL lead strategist Pong Leung. “And people are sick of yelling at each other.”

The lab “believes Alberta can be the key to solving climate change by becoming a leader in new energy technologies,” CBC explains. “Of course, in the heart of oil country this idea presents challenges—and disagreements. That’s where the game comes in.”

The news report recounts participants’ reactions to a series of different statements, with no one uttering the words “oil” or “pipelines” until Leung insisted someone address the elephant in the room. There was nothing like unanimity among the 100 or so people in the room—and that was the point.

The Alberta Narratives Project, an initiative of UK-based Climate Outreach, is another effort to help participants from widely varying backgrounds find common language on climate change and climate solutions.

“Climate change has become quite a polarized issue and it often falls down the line of identity,” Climate Outreach Canadian associate Amber Bennett told The Canadian Press, in a post published by National Observer. “Communication has a big role to play because it can help broaden that and talk to people about what they care about rather than asking them to be different than who they are.”

But first, there are some barriers to be broken down, said organizer Julia-Maria Becker of the Pembina Institute. “People don’t feel comfortable the moment they start talking about this. They get shut down because they feel they are going to offend someone.”

Or they take offence—one of the best ways to crush a good dialogue before it starts is to tell oilpatch workers their industry is “dirty”, Becker said.

“To get past that, the project used a method developed in the United Kingdom. It convened 55 meetings across the province with a total of 482 people. Each group had something in common. There were meetings for church-goers, engineers and geologists, schoolchildren, farmers, women, business leaders, oilfield workers, immigrants, parents, environmentalists, and small-c conservatives,” CP explains.

“Group leaders presented participants with five ‘stories’ about Alberta—five- or six-paragraph sketches that presented climate change within contexts from provincial pride to future generations to ethics. Participants discussed which parts they liked and which they didn’t.” It turned out that “the common bond within the group made people more willing to speak.”

The sessions were so popular that they often ran into overtime, partly because the point was to find a common language, not to develop policy. “This is not convincing people about policies,” Becker said. “It’s about having conversations about options.”

One hopeful takeaway: “people are tired of bluster,” CP states, with “Alberta First” earning as many eyerolls as “Shut the Tarsands”. “The language comes across as too politic-y, not authentic or genuine,” Bennett said. “People wanted language that isn’t so carefully worded and sterilized, but language we use in our everyday conversation.” They also “wanted a sense of acknowledgment that this is hard and it’s going to be hard.”