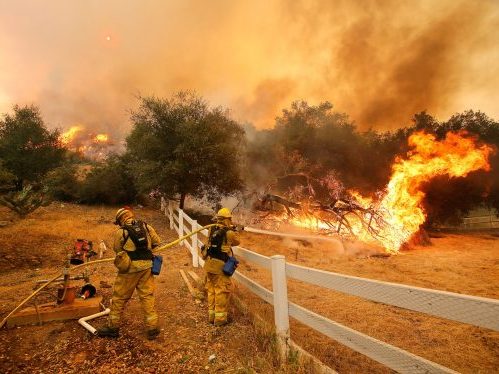 As wildfires and other climate-driven natural disasters become more frequent and severe, scientists are scrambling to understand the human and animal health hazards they leave behind.

“Scientists, many of them funded by the U.S. National Institute of Environmental Health Sciences (NIEHS), are studying pregnant women exposed to polluted air and water after Hurricane Harvey hit Houston in 2017; residents of Puerto Rico forced to live in unrepaired homes where mold and fungi grew after Hurricane Maria in 2017; eggs from backyard chickens that ate California wildfire ash, among other topics,” Reuters reports.

In one ongoing study of neighbourhoods destroyed by the wildfire that hit Santa Rosa, in California’s Sonoma County, in 2017, “researchers found nearly 2,000 more chemical compounds in the soil than in uninhabited parkland nearby,” the news agency adds. The study team is still at work, trying to identify the compounds.

“Everything that we’re doing, it feels like this is a question nobody has asked before, and we have no answers,” said Irva Hertz-Picciotto, director of the Environmental Health Sciences Center at University of California Davis.

“It’s fundamentally critical that we be able to understand these situations and the risks to populations both in the short term and in the long term,” added NIEHS senior medical advisor Aubrey Miller.

In the former town of Paradise, California, essentially wiped out by last year’s massive Camp Fire, hazmat teams from the U.S. Environmental Protection Agency were recently on the scene, “loading seared paint cans, partially melted pesticide containers, and the remains of propane tanks onto trucks to be hauled away,” Reuters states. “Rusty Harris Bishop, a toxics expert with the EPA who worked on the Paradise cleanup, said removal teams take away whatever contaminants they find, including melted pipes or asbestos-laden construction materials, going beyond the older definition of hazardous household waste.”

But while Reuters says research protocols are evolving, there are still some very basic barriers—like the emergency rules that have twice prevented air pollution researcher Kevin Bein from entering disaster areas to collect samples before the wind blew away the evidence of toxic contamination. Typically, only first responders and journalists can cross police lines, so Bein said he’s planning to train as a firefighter before the next research opportunity comes his way.

“As these types of fires become more frequent in nature, where instead of once every decade it’s once every summer,” he told Reuters, “we really need to know how this is going to affect health.”