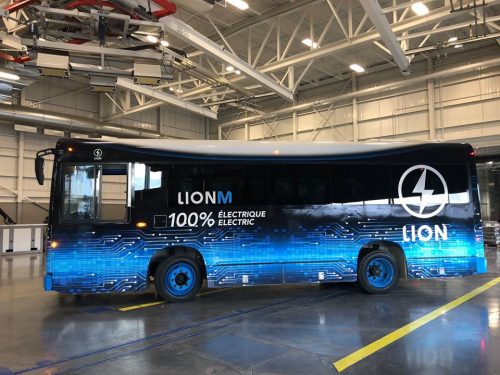 Montreal-based electric bus manufacturer Lion Electric Co. is introducing a new truck model, the Lion8, that will cover up to 400 kilometres (250 miles) on a charge and carry up to 11,350 kilograms (25,000 pounds) of cargo, primarily for urban deliveries.

“There are so many uses for it. Anything in the delivery space. A lot of people will put a dry box on it, or in the food industry, a refrigerated box on top of it,” said company spokesperson Patrick Gervais. “It also could be a garbage truck.”

And FreightWaves reports the truck was designed with a fierce eastern Canadian winter in mind. We’ve put in a heating and cooling system for the batteries to make sure you lose no more than 10% in winter,” Gervais said.

The promotional photo accompanying the story shows a Lion8 sporting the logo of the Société des alcools du Québec, the provincial liquor commission. The SAQ expects to take delivery of its first Lion8 in September, at an estimated cost of C$300,000 to $400,000.

Lion Electric already produces a line of electric buses for customers in Canada and the United States, has capacity for 1,000 vehicles per year, and has been testing new truck models with bulk shippers Freightliner and Penske, FreightWaves states. “Ours is not a pilot program,” Gervais said.

Rooftop Solar on 500 Palestinian Schools to Deliver Power for 16,000 Homes