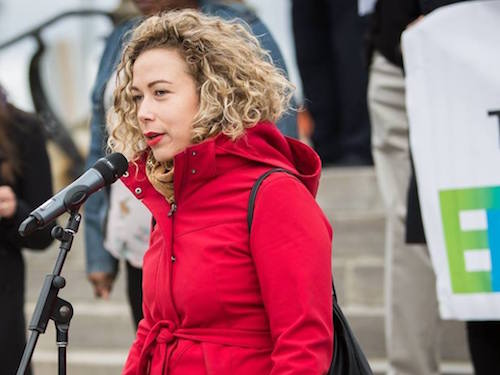 The announcement Wednesday triggered an outpouring of congratulations, support, and respect from climate hawks across Canada.

Abreu served as Climate Action Network-International’s head of delegation at the crucial Intergovernmental Panel on Climate Change (IPCC) meeting in October 2018, where scientists, civil society, and government officials resisted efforts to water down the panel’s groundbreaking report on 1.5°C pathways. “Ultimately, I think this process really drove home the fact that science can’t be negotiated,” she told The Mix at the time. “Of course, we see that political agendas find their ways into most places.” But “in the end, the science prevailed, and that’s a really inspiring part of this story.”

Which is precisely the kind of thinking and action the Apolitical list sets out to acknowledge.

“At a time when young people everywhere are marching to demand action on climate, it’s more important than ever to celebrate and support those with the most power to act: the people driving tangible policy change,” the organizers write. “Those recognized include high-profile advocates whose work is indispensable to raising awareness and demanding change. Others are rising stars who are making their mark in local communities and are a driving force behind governmental progress.”

Other Canadians on the list included Environment and Climate Change Minister Catherine McKenna and climate scientist Katharine Hayhoe of Texas Tech University, both of whom made the top 20, as well as Indigenous clean water activist Autumn Peltier, federal Green Party leader Elizabeth May, author and activist Naomi Klein, and Bank of England Governor Mark Carney.

Rural Leaders Must ‘Come Out of Their Foxholes’ on Climate, Farm Writer Urges