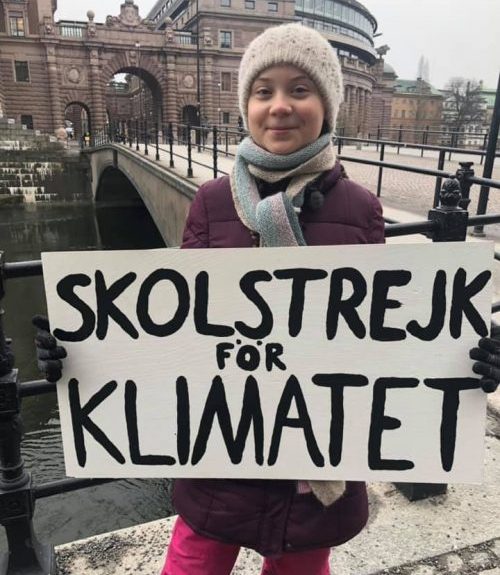 Last Friday, hundreds of thousands of students in the United States and around the world were out in the streets rather than in their classrooms, demanding that our political leaders address the climate crisis with the urgency and focused action that the science so clearly demands.

As a soon-to-be-67-year-old advocate who’s been working on U.S. and international climate policy and politics for some 30 years—as well as the father of a 24-year-old daughter—I welcome the passion, energy, and directness these young leaders are bringing to the conversation. As I listened to the powerful statements that youth leaders made at the rally at the U.S. Capitol, I found myself experiencing a range of emotions: inspiration, hope, humility, and sadness.

I am inspired by the strength and moral clarity of the students’ demands, and hopeful that their actions will help drive leaders in both the public and private sectors to pursue the transformational changes that are required to come to grips with the climate crisis.

I am humbled by the recognition that despite our best efforts—as well as the significant victories we have won on renewable energy and clean vehicle policies, reducing deforestation, and other important fronts—I and the many other advocates of my generation have fallen well short in our efforts to drive climate action on the scale that’s needed.

And I am profoundly saddened by the fact that even if we are able to dramatically ramp up emissions reductions so as to meet the temperature limitation goals of the Paris Climate Agreement, the world these students will experience during their lifetimes will be severely stressed by the impacts of climate change.

Youth activism on climate is certainly not new; for example, youth groups in Europe, the U.S., and other countries have been attending the international climate negotiations for more than 20 years, and in 2005, they formed the International Youth Climate Movement to coordinate their efforts. And the youth-driven Power Shift conferences that started in Washington, DC in fall 2007 and spread around the world have engaged thousands of young activists in the fight against coal and oil and for a clean, renewable, energy-efficient world.

But the strategy of school climate strikes is much more recent; it began last August, when a then-15-year-old student in Sweden, Greta Thunberg—inspired by the March for Our Lives protests on gun control organized by students at Florida’s Marjory Stoneman Douglas high school—began what she called the Skolstrejk för klimatet (school strike for the climate).

I saw Greta speak at last December’s UN climate summit meeting in Katowice, Poland, and her clear and passionate words are still ringing in my ears: “You only talk about moving forward with the same bad ideas that got us into this mess, even when the only sensible thing to do is pull the emergency brake,” she told the ministers and negotiators assembled in the plenary hall. “You are not mature enough to tell it like is. Even that burden you leave to us children…You say you love your children above all else, and yet you are stealing their future in front of their very eyes.”

She ended with this clear warning: “We have not come here to beg world leaders to care. You have ignored us in the past and you will ignore us again. We have run out of excuses and we are running out of time. We have come here to let you know that change is coming, whether you like it or not. The real power belongs to the people.”

In the last six months, the spark that Greta lit has become a wildfire, with school strikes and student marches and demonstrations all across the world. And they have struck a nerve. In the United Kingdom, where student strikes took place in 60 cities and towns across the country last month, government ministers—and even Prime Minister Theresa May—at first criticized the strikers. But after commentators from a range of publications expressed their support for the strikes, several of these ministers reversed course, announcing their support for the children. Within a month of the strikes, Parliament held the first debate on climate change it has had in years – though it was lightly attended by members of the governing Conservative party.

And just last week, at the United Nations Environment Assembly in Nairobi, Kenya, French President Macron gave a shout-out to the climate strikers: “Young people are telling us ‘you’re not going fast enough’,” he said. “And they’re right, because we have been too slow. We all have to move: governments, big business, citizens.”

Last Friday, more than 2,000 student actions took place in more than 120 countries, according to the FridaysForFuture organizers. Here in the United States, Youth Climate Strike organized actions at state capitols, city halls, and universities across the country. Among the reasons they give for the strike:

• Because decades of inaction has left us with just 11 years to change the trajectory of the worst effects of climate change, according to the October 2018 UN IPCC Report.

• Because our world leaders have yet to acknowledge, prioritize, or properly address our climate crisis.

• Because marginalized communities across our nation—especially communities of colour, disabled communities, and low-income communities—are already disproportionately impacted by climate change.

• Because if the social order is disrupted by our refusal to attend school, then the system is forced to face the climate crisis and enact change.

At the conclusion of each of the major international climate negotiating milestones over the last 30 years—including the Rio framework treaty in 1992, the Kyoto Protocol in 1997, and the Paris Agreement in 2015—my message to policy-makers and reporters has been frustratingly consistent: “this (fill in the blank) agreement represents an important step forward, but much more must be done.”  For as the Chinese philosopher Laozi (or Lao Tzu) said, “If you do not change direction, you may end up where you are heading.” And as the world’s scientific community has made abundantly clear, where we are currently heading on climate change is unacceptable.

The time for incrementalism is over; bold action is needed, and now. As my colleague Peter Frumhoff noted when the Intergovernmental Panel on Climate Change Special Report on Global Warming of 1.5 ºC was released last October, “every fraction of a degree of warming we can avoid matters.”

When I first came to the Union of Concerned Scientists in 1989 to start up our work on climate change and energy issues, we had many choices, many paths to take, and many opportunities to avoid the worst impacts of climate change. The hard truth is that we didn’t make the choices that we should have, and now the paths ahead range from hard to hellish and the opportunities to avert truly catastrophic climate change are narrowing with each passing year. Adults of conscience feel real guilt and shame and sadness over this, as we should—along with deep anger at the short-sighted politicians and self-interested corporate leaders who have worked so hard to block progress at every turn.

The young climate strikers who were out on the streets last Friday know their whole future is on the line, and they’re finding the courage to throw themselves into the fray. Their actions are creating cracks in the status quo through which real light and possibility can flow; we need them to keep pressing to make those cracks wider and wider, until the whole edifice of denial, delay, and delusion on climate change comes tumbling down.

Adults like me will stay in the fight, working side-by-side with these young new leaders to confront the powerful fossil fuel lobby and others who are standing in the way of bold climate action, and to prod our political leaders to start acting as grown-ups.

But thanks to the growing wave of youth action, the bitter mix of grief, fatigue, frustration, and anger that so many of us grizzled climate warriors all too often feel will now be overlaid with something fresh, inspiring and beautiful: new hope, and gratitude for it. We owe you, young friends.

Observer Editorial: It’s Shameful of Adults to Force Children to Lead on Climate