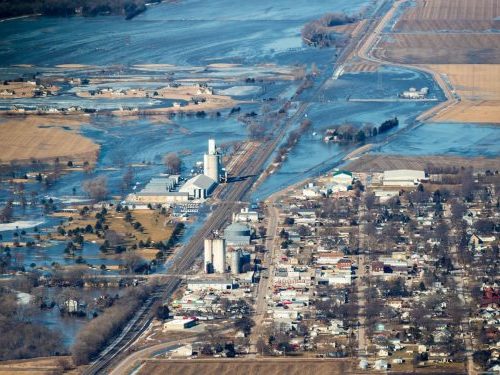 At least three people are dead, thousands have been evacuated, millions are under flood watch, and many farm operators have lost their livelihoods after last week’s “bomb cyclone” storm brought massive flooding to much of Nebraska, western Iowa, and parts of Wisconsin and South Dakota.

“The Nebraska Emergency Management Agency (NEMA) said Sunday that 17 locations across the state had been hit by record flooding, and more records could be broken over the next two days,” Common Dreams reports. “Flooding in some areas may continue until next weekend.”

The impact was visible from space, with Copernicus, the European Union’s Earth Observation Program, describing the flooding as “biblical”.

350.org co-founder Bill McKibben called the still-unfolding catastrophe a sign of a “hot new world”, tweeting that “the Midwest flooding is off the charts—at places in Nebraska, the Missouri is four feet higher than it’s ever been before.”

“41 locations set new record river crests in six states. Most Missouri Valley tributaries are seeing river levels fall, but it will take a bit longer for the Missouri River, itself, to fall” in Nebraska and Iowa, tweeted The Weather Channel, which blamed the flooding on “a perfect storm of meteorological factors” including the bomb cyclone.

“Despite the antics of climate change-denying politicians,” said Penn State University climate scientist Michael Mann, “the increased snowfall amounts associated with record-strength Nor’easters (and ‘bomb cyclones’) is symptomatic of, rather than evidence against, human-caused planetary warming.”

“The heavy rains from the bomb cyclone were accompanied by very warm temperatures which melted a snowpack of five to 13 inches of snow,” meteorologist Jeff Masters explained last week. “The snowpack had a high liquid water content—equivalent to an extra one to three inches of rain falling—since the snow had been accumulating and compacting since early February. When Wednesday’s warm temperatures in the 50s and 60s (Fahrenheit) and heavy rain melted the snow, the runoff flowed very quickly into the rivers, because the frozen ground was unable to absorb much water to slow things down. Many of the flooding rivers had thick ice covering them, due to the long stretch of cold weather the Midwest endured this winter. When the huge pulse of floodwaters entered the rivers, this caused the ice to break up and create ice jams, which blocked the flow of the rivers, causing additional flooding.”

In Nebraska, “the record floods that have pummeled the Midwest are inflicting a devastating toll on farmers and ranchers at a moment when they can least afford it, raising fears that this natural disaster will become a breaking point for farms weighed down by falling incomes, rising bankruptcies,” and the fallout from Donald Trump’s trade wars, the New York Times reports.

“The rail lines and roads that carry their crops to market were washed away by the rain-gorged rivers that drowned small towns,” the paper states. “Farmers say they have been cut off from their animals behind walls of water, while others cannot get to town for food and supplies for their livestock.”

The Times story is a detailed account of baby calves lost, family farms devastated, and an economic toll that will be hard to calculate. “There’s not many farms left like this, and it’s probably over for us too, now,” said farmer Anthony Ruzicka. “Financially, how do you recover from something like this?”

“It’s going to affect them for years,” said county emergency coordinator Hannah Sucha. “You’re not going to be able to sleep at night because you’ve got so much loss.”

“You’ve got a generation of young farmers on the verge of leaving; you’ve got a lot of mental health stress out there—and that was before the storm,” added National Farmers Union President Roger Johnson. “You just pile this on top.”

The Express in London, UK reports that floodwaters cut off the Cooper nuclear facility near Brownville, NE, the second time in seven months that a severe storm has put a U.S. nuclear plant at risk. Operators were forced to fly in supplies and personnel by helicopter. One-third of Offutt Air Force Base, home of U.S. Strategic Command, was also stranded.

Up to 1,000 Feared Dead in Mozambique, Making Tropical Cyclone Idai Africa’s Worst Ever