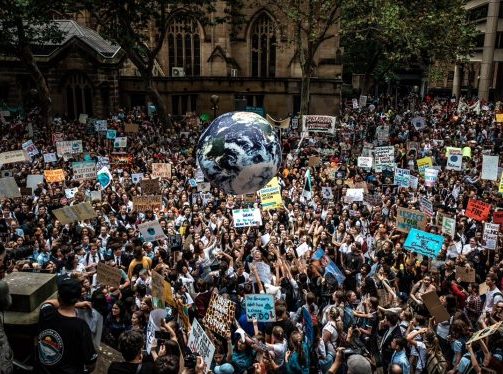 More than 1.4 million students in more than 300 cities across 128 countries and all seven continents skipped classes to demand climate action at an estimated 2,229 events in more than 40 languages on Friday, March 15, as The Guardian reported that 16-year-old Youth Strike for Climate founder Greta Thunberg had been nominated for the Nobel Peace Prize.

With fridaysforfuture.org still collecting updates from local strike organizers, an estimated 530 future events in 82 countries were already taking shape, and Canadian school strike organizers had set Friday, May 3 as the date for their next coordinated walkout.

Some of the best photos of local protests showed up on Common Dreams, Vox, Grist, CBC, and Below2°C.

“We have proposed Greta Thunberg [for Nobel honours] because if we do nothing to halt climate change it will be the cause of wars, conflict, and refugees,” Norwegian Socialist MP Freddy André Øvstegård said Thursday. “Greta Thunberg has launched a mass movement which I see as a major contribution to peace.”

“Honoured and very grateful for this nomination,” Thunberg tweeted Thursday in reply. “Tomorrow we #schoolstrike for our future. And we will continue to do so for as long as it takes.”

The global movement began in August with Thunberg conducting her solo school strike on the steps of Sweden’s Riksdag in Stockholm. “The governments failed to respond properly to the dramatic challenge of our climate crisis,” she said in a global release circulated by 350.org. “Our generation, the least responsible for the acts of the polluters, will be the ones to see the most devastating impacts of climate change. World leaders are losing the window to act, but we are not gonna stand still watching their inertia.”

In a post for The Guardian, strike leaders Thunberg, Anna Taylor, and colleagues said the school strikes were inevitable.

“This movement had to happen, we didn’t have a choice,” they wrote. “The vast majority of climate strikers taking action today aren’t allowed to vote. Imagine for a second what that feels like. Despite watching the climate crisis unfold, despite knowing the facts, we aren’t allowed to have a say in who makes the decisions about climate change. And then ask yourself this: wouldn’t you go on strike too, if you thought doing so could help protect your own future?

“So today we walk out of school, we quit our college lessons, and we take to the streets to say enough is enough. Some adults say we shouldn’t be walking out of classes—that we should be ‘getting an education’. We think organizing against an existential threat—and figuring out how to make our voices heard—is teaching us some important lessons.”

They added that “these strikes are happening today—from Washington, DC to Moscow, Tromsø to Invercargill, Beirut to Jerusalem, and Shanghai to Mumbai—because politicians have failed us. We’ve seen years of negotiations, pathetic deals on climate change, fossil fuel companies being given free rein to carve open our lands, drill beneath our soils, and burn away our futures for their profit. We’ve seen fracking, deep sea drilling, and coal mining continue. Politicians have known the truth about climate change and they’ve willingly handed over our future to profiteers whose search for quick cash threatens our very existence.”

Fridaysforfuture’s events list included 252 in Italy, 216 each in France and the United States, 206 in Germany, 181 in Sweden, 167 in the United Kingdom, 92 in Spain, 80 in Canada, 56 in Australia, 52 in Norway, 44 in India, 37 each in Belgium and Portugal, 35 in Ireland, 34 in Mexico, 32 in Finland, 30 each in Brazil and Poland, 27 in Denmark, 26 in Switzerland, 22 in Argentina, six in China, and one to three events in each of Albania, Antarctica, Azerbaijan, Bulgaria, Burkina Faso, Cuba, Cyprus, Congo, Egypt, Guatemala, Iran, Iraq, Israel, Japan, Kenya, Morocco, Palestine, Sri Lanka, Togo, Uganda, and Venezuela, among many others.

And in one tweet, Thunberg indicated those were just the youth who were permitted to protest. “Only democracy, together with science, and goodwill between nations can save us,” she wrote. “The rest of the world must strongly support those children who are not allowed to protest.”

350’s quote sheet for the day included student and youth voices from around the world.

“In India, no one talks about climate change,” said Vidit Baya, 17, of Udaipur. “You don’t see it on the news or in the papers or hear about it from government. We want global leaders to declare a climate emergency. If we don’t act today, then we will have no tomorrow. ”

“We face heartbreaking loss due to increasingly extreme weather events,” said Kaisanan Ahuan in Puli City, Taiwan. “We urge the Taiwanese government to implement mitigation measures and face up to the vulnerability of Indigenous people, halt construction projects in the Indigenous traditional realm, and recognize the legal status of Plains Indigenous People, in order to implement environmental protection as a bottom-up approach.”

“We have reached a point in history when we have the technical capacities to solve poverty, malnutrition, inequality, and of course global warming,” said Eyal Weintraub and Bruno Rodriguez, both 18, of Argentina. “The deciding factors for whether we take advantage of our potential will be our activism, our international unity, and our ability to develop the art of making the impossible possible. Whether we succeed or not depends on our political will.”

“I want to be certain that our government is committed to investing in a just transition to a more sustainable country, that we will lower carbon emissions and curb climate change,” said Dona Van Eeden, 21, in Cape Town, South Africa. “I am joining this strike to demand that decisions are more future-focused and that policy will reflect our environmental rights as written in our constitution.”

“The damage done by multinationals is enormous: the lack of transparency, dubious contracts, the weakening of the soil, the destruction of flora and fauna, the lack of respect for mining codes, the contamination of groundwater,” said Mone Fousseny, 22. “In Mali, the state exercises insufficient control over the practices of the multinationals, and it is us, the citizens, who suffer the consequences. The climate alarm has sounded, and the time has come for us all to realize that there is still time to act locally, in our homes, our villages, our cities.”

“Stop telling us to go to school so we can figure out how to stop the climate crisis, because we already know how to do it,” said protester Alik Volkov, 17, outside Queen’s Park in Toronto. “I’m literally scared of dying. In 50 years when sea levels rise…there’s going to be less space for people to live in, there’s going to be less food around.”

In New Orleans, the 20 students ranging from pre-kindergarten to college who joined the protest “were painfully aware of the state’s ever-present juxtaposition: Its long reliance on the fossil fuel industry and its vulnerable position in the crosshairs of climate change,” DeSmog Blog reports. But even so, “I hope this raises awareness,” said strike leader Berelian Karimian, 14. “I wouldn’t be anywhere else.”

In Minnesota, 16-year-old strike leader Isra Hirsi was the daughter of recently-elected Rep. Ilhan Omar, leading Grist climate writer Eric Holthaus to recount what must have been the easiest effort ever to recruit a sitting member of Congress to a public protest. “Proud mom here!” Omar tweeted. “I hope other Members of Congress will join me in this strike. We need to listen to the wisdom of our kids!”

The strikes won support from the International Trade Union Confederation, C40 Cities, Scientists for Future, and United Nations Secretary General António Guterres, who cast his climate summit coming up in New York in September as an opportunity for governments to give meaning to their commitments under the Paris Agreement and address the students’ concerns. “These schoolchildren have grasped something that seems to elude many of their elders: we are in a race for our lives, and we are losing,” he wrote in The Guardian. “My generation has failed to respond properly to the dramatic challenge of climate change. This is deeply felt by young people. No wonder they are angry.”A chart compiled by InsideClimate News showed that scientists were already raising the alarm about climate change when Donald Trump and national leaders Angela Merkel, Emmanuel Macron, and Justin Trudeau were in their teens and early 20s. Follow-up graphs portrayed projected global temperatures, sea level rise, and Arctic ice loss by the time today’s teens are Trump’s age.