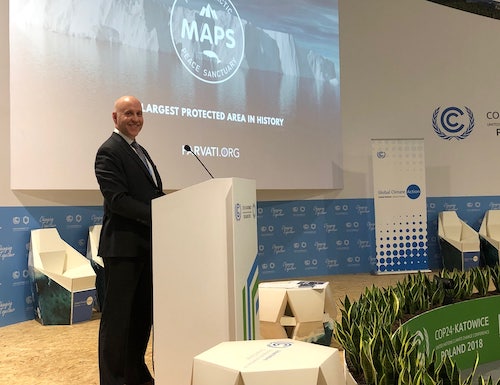 It isn’t every day that someone sets out to build an international environmental treaty with their bare hands. That’s what Darcy Belanger, Director of Strategic Initiatives for Parvati.org, was trying to achieve when he boarded Ethiopian Airlines Flight 302 to attend this week’s United Nations Environment Assembly (UNEA) in Nairobi, Kenya.

The flight crashed six minutes after take-off. All 157 passengers and crew, including Belanger and 17 other Canadians, 32 Kenyans, and 21 workers with the World Food Program, the United Nations Refugee Agency, and the UN Food and Agriculture Organization, were killed.

“These kinds of tragedies are always heartbreaking,” Climate Action Network-Canada Executive Director Catherine Abreu wrote yesterday. “Yet in the past 48 hours, it has been particularly devastating to learn that many of those who perished were our colleagues and friends: courageous activists, academics, and young people dedicated to the fight for justice and environmental protection,” most or all of them en route to the UNEA.

The passengers included Stéphanie Lacroix, Micah Messent, Danielle Moore, and Angela Rehhorn, all members of the Canadian youth delegation to the assembly, as well as Pius Adesanmi, director of the Institute of African Studies at Carleton University, Calgary accountant and community leader Derick Lwugi, and Peter DeMarsh, New Brunswick-based chair of the International Family Forestry Alliance.

Multiple news reports captured the staggering losses to the environmental and humanitarian communities, and the depth of experience, knowledge, and determination that brought many of the passengers to be on Flight 302. The UNEA delegates were on that plane out of a deep commitment to something bigger than themselves, a sense that by making the trip to Nairobi, they were working to make things better.

Which brings us to Darcy Belanger.

I first met Darcy at COP 22 in 2016. At their best, COPs are formal, formulaic gatherings where the tiniest slivers of progress are celebrated as breakthrough victories, and the sheer weight of the official process leaves little or no space for independent, creative agendas. So it was inspiring but felt deeply improbable when Darcy showed up with a compelling set of facts and arguments about the fragility of the Arctic Ocean, a handbook on citizen treaties, and the calm, steady assurance that once a minimum number of countries signed the MAPS Treaty, it would become binding for them and a source of growing moral suasion for all the rest.

“Admired for his courage, outstanding achievements, and noble qualities, Darcy was a hero in every sense of the word,” writes Parvati.org. “He was passionately devoted to the protection of all life through the realization of MAPS, the Marine Arctic Peace Sanctuary,” an audacious attempt to reach a binding international agreement to protect the Arctic Ocean—and with it, the future of humanity against the threat of runaway climate change.

Darcy had taken time off from his work as director of professional development for Edmonton-based PCL Construction and covered his own costs to attend the conference—as he had done for at least seven other international events dating back to the 2015 UN climate conference in Paris, COP 21. He knew he needed to meet ministers and senior officials from national governments to get the MAPS Treaty on their agendas. If they were gathering in large numbers at international policy conferences, he was determined to be there.

“Darcy was truly a champion and a force of nature, one whose passing leaves an unimaginable gap in this work as well as in the lives of his family, friends, and colleagues,” Parvati notes. “He would boldly approach the highest-ranking officials to engage them on MAPS and humbly serve alongside any willing volunteer. His unofficial title within Parvati.org was ‘quarterback’ as he helped move MAPS forward at all levels.”

Now, “he leaves us with a deep determination to honour his legacy of courage, compassion and focus.”

On the third day of COP 22, delegates woke to the news that a climate denier was on track to enter the White House after promising to salvage his country’s dying coal industry and unwind the 2015 Paris Agreement. That left the conference with 10 days to reclaim the momentum and commitment behind the Paris deal, and Darcy with even less scope to approach delegates with an idea that was both fundamental to what they were trying to do and far removed from the immediate crisis in their paths.

He didn’t just persevere. I never saw him pause or break stride. I remember parts of one conversation in which he tried to pull me back to the shared values and common humanity that connect us all, his utter, pragmatic certainty that those enduring strengths would be sufficient to get the climate crisis addressed and the MAPS Treaty adopted.

Surrounded by one of the most stifling policy environments humanity has ever crafted, beset by the most devastating crisis a Russian troll factory has ever manufactured, Darcy kept his focus and carried on.

In her note to the Canadian climate community, Catherine Abreu recalls a similar moment at COP 24, the memorably dysfunctional 2018 UN climate conference in Katowice, Poland.

“I was demoralized by the negotiations,” she writes. “But with his usual bright, relentless determination, he cheered me up by sharing stories of the amazing wins he and his colleague Vandana had made on the MAPS campaign in Katowice. Darcy was exactly the kind of compassionate leader our movement needs and cannot afford to lose.”

COP 24 was also where Abreu met Stéphanie Lacroix, who was on her way to Nairobi last week as head of the Canadian youth delegation.

“Stéphanie worked with her [UN Association in Canada] colleagues to develop the resources and capacity necessary to bring delegations of young environmental leaders like herself to UN conferences,” she writes. “Having spent the last few years attending such conferences myself, I know that the youth who attend are often the most fierce force demanding ambition and progress from processes that can be crushingly incremental and marginalizing.” In Katowice, “she and all the Canadian youth on the ground offered so much of themselves in a constant, awe-inspiring call for inclusion and action.”

I last saw Darcy at the 2017 UN conference in Bonn, where his advocacy for MAPS was hitting high gear. In an interview for CAN-Raction, CAN-Rac’s daily COP newsletter, he explained why the treaty is so important.

“We see the melting polar ice cap as the greatest threat to human survival on this planet,” he said. “We fully endorse and support the great work being done to make the transition off fossil fuels, but the two need to happen simultaneously, because the work on fossil fuels will be moot if we lose the polar ice cap and the Arctic Ocean unravels. The Marine Arctic Peace Sanctuary (MAPS) Treaty stabilizes this critical climate regulating region of the world while we continue to decarbonize.”

And he expressed the commitment and determination that brought him to four COPs in a row—and, ultimately, to Flight 302. “This is about the survival of humanity on the planet. My day job is very satisfying to me, but the consequences are not nearly the same,” he said. And “unlike the regular world, there’s a very clear sense of purpose among the people at the COP.”

In the weeks leading up to the UNEA, Darcy’s Facebook timeline was full of news from several African countries that were getting seriously engaged with MAPS, including photos of local advocates holding events and hoisting banners to show their support for Arctic environmental protection.

“We’re coordinating grassroots events in Africa leading up to the UNEA in an effort to encourage the African nations to sign the MAPS Treaty,” he wrote in a February 14 email, the last I received from him. “We are hoping to get the signatures of at least 50 African countries next month. We already have MAPS Ambassadors in several countries across Africa coordinating with us. The next update you get from me might have a lot more exciting developments to share!”

For Darcy and all the other passengers and crew…may they rest in power, and may their memories be for blessing.