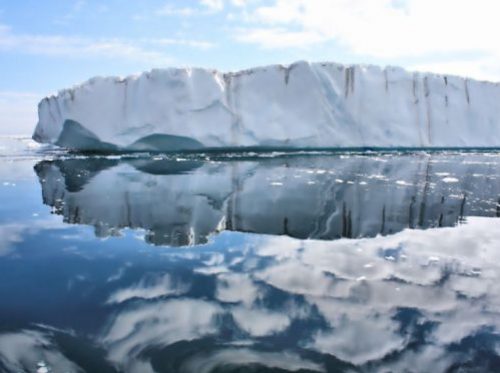 Rainfall is making the Greenland ice sheet melt more quickly, even during the long Arctic winter, concludes a new study in The Cryosphere, a journal of the European Geosciences Union.

“Precipitation usually falls as snow in winter—rather than as rain—which can balance out any melting of the ice in the summer,” the BBC reports. But “on more than 300 occasions between 1979 and 2012, the analysis found that rainfall events were triggering a melting of the ice.”

The frequency of those events increased sharply, from two per year at the beginning of the study period to 12 in 2012. And “a growing number happened in winter months when the permanent dark of the polar winter would be expected to keep temperatures well below freezing,” the UK broadcaster states.

“We were surprised that there was rain in the winter,” said lead author Dr. Marilena Oltmanns of Germany’s GEOMAR ocean research centre. “It does make sense, because we’re seeing flows of warm air coming up from the south, but it’s still surprising to see that associated with rainfall.”

“This is starting to open a window to what’s driving the melting,” added co-author Marco Tedesco of Columbia University’s Lamont-Doherty Earth Observatory. “ The liquid water is carrying the energy from the surface deep into the ice sheet.”

“When a frozen snowflake falls on the Greenland ice sheet, it lands with a whisper and stays frozen, sometimes for months,” InsideClimate News explains. “But raindrops splat down, making little craters and melting some of the adjacent snow crystals. Multiplied across thousands of square miles, they can trigger widespread melting and runoff, which can lead to more sea level rise.”

While the study found no change in total precipitation over the study period, “more of it fell as rain,” InsideClimate notes. “The scientists estimated that almost a third of the total runoff measured was triggered by rainfall.” Moreover, “melting events triggered by rain lasted longer, lengthening from an average of two days to three in the summer, and from two days to five in the winter.”

Glaciologist Jason Box, who wasn’t involved in the study, told BBC he’d had direct experience with sudden rainstorms on the Greenland ice sheet. “After weeks of sunshine, it started raining on us and it completely transformed the surface—it got darker,” he said. “”And I became convinced, only by being there and seeing it with my own eyes, that rain is just as important as strong sunny days in melting the Greenland ice sheet.”

He added that, “in a warming climate, it’s not rocket science that you’re going to have more rain than snow, and it’s one more reason why the ice sheet can go into deficit instead of being in surplus.”

Citing a research team led by Box, InsideClimate notes that the loss of Arctic land ice increased about tenfold from the quarter-century ending in 1996 to the most recent quarter-century. “Another study, published in February, found that melting on just the Greenland ice sheet had quadrupled between 2002 and 2012, and that the greatest increase was in southwest Greenland—a region with few glaciers that is projected to experience more rainfall in the coming decades.”