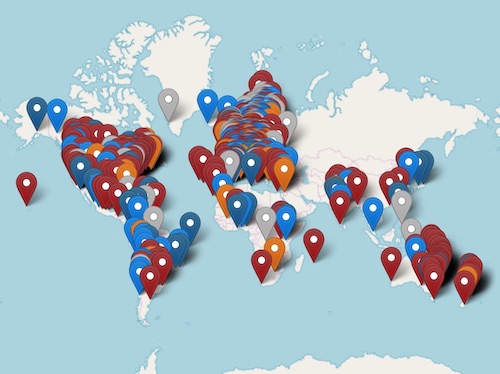 With #FridaysForFuture reporting school strikes breaking out in dozens of communities around the world, German Chancellor Angela Merkel is taking heat from her own political party for declaring that she “strongly welcomes” the rise of student protests for climate action.

“I think this is a very good initiative,” Merkel said in her weekly video podcast. “I encourage students to turn to the streets and fight for the climate.”

“While Merkel’s comments were welcomed by climate activists, some members of her own party complained the chancellor is encouraging truancy and undermines ‘responsible’ teachers and headmasters,” the Berlin-based news outlet notes. But “Merkel said she could understand why many young people want more rapid action, for instance an earlier end to coal-fired power production in Germany.”

Yet even as she encouraged the strikes, Merkel said jobs and a strong economy would have to be “reconciled” with climate targets, Clean Energy Wire notes. ” I, as a head of government, have to point out that there’s a lot we need to take into consideration,” she said, noting that a multistakeholder commission in Germany had proposed phasing out the country’s last coal-fired power plant in 2038. “This might seem long from the perspective of school students, but it will demand a lot from us.”

Clean Energy Wire says the chancellor “had previously irritated climate activists, who interpreted remarks she made at the Munich Security Conference as speculation that the school protests might be influenced by a foreign power, a claim her spokesman denied. Her explicit encouragement of the protests was welcomed by climate activists—but it was less welcome within her own party, the conservative CDU/CSU alliance.”

“I believe it is irresponsible if the chancellor flatly calls protests that violate compulsory school attendance ‘a good initiative’,” said conservative activist Alexander Mitsch. “Political engagement is always good, skipping school is almost always bad—the more often you do it, the dumber you get,” added CDU Economy Minister Peter Altmaier.

German Teachers’ Association President Heinz-Peter Meidinger called the strikes a difficult balancing act. “On the one hand, we want to educate politically mature citizens,” he told local media. “But we cannot leave it to schools and parents to decide whether they go to school or not.”